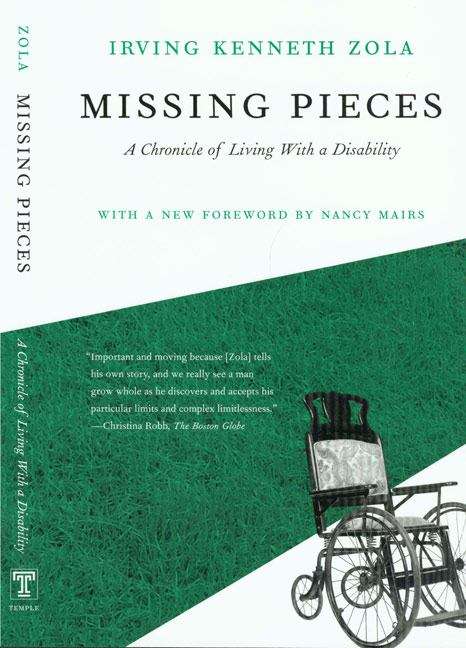 he personal odyssey of a man with a disability, this passionate book tries to tell as well as analyze what it is like to have a disability in a world that values vigor and health. Zola writes, "Missing Pieces is an unraveling of a social problem in the manner of Black Like Me. Like its author, I, too, am a trained social observer, but for me 'passing' was not an issue. For I already have the stigmata of the disable - the braces, the limp, the cane - though I have spent much of my life denying their existence." The author started out in the role of a social scientist on a seven-day excursion to acquaint himself with an extraordinary experiment in living - Het Dorp, one of the few places in the world designed to promote "the optimum happiness" of those with severe physical disabilities. Neither a medial center nor a nursing home, Het Dorp is a village in the western-most part of the Netherlands. What began as a sociological attempt to describe this unusual setting became, through the author's growing awareness, what can only be called a socio-autobiography. Resuming his prior dependence on a wheelchair, the author experienced his own transformation from someone who is "normal" and "valid" to someone who is "invalid." The routine of Het Dorp became his: he lived in an architecturally modified home, visited the workshops, and shared meals, social events, conversation, and perceptions with the remarkably diverse residents. The author confronts some rarely discussed issues - the self-image of a person with a chronic disability, how one fills one's time, how one deals with authority and dependence, and love and sex. Missing Pieces offers striking insights into an aspect of the human condition shared by nearly 30 million Americans. It is must reading for the general reader, as well as for the rehabilitation counselor, social worker, or social scientist. Author note: Irving Kenneth Zola (1935-1994) was Professor of Sociology at Brandeis University and a founding member and counselor at the Boston Self-Help Center. Nancy Mairs is the author of seven books, including Waist-High in the World: A Life Among the Disabled, and most recently, A Troubled Guest: Life and Death Stories. She lives in Tucson with her husband, George.