This Land Was Made for You and Me 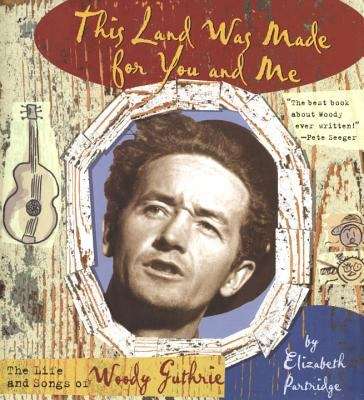 Before Springsteen and before Dylan, there was Woody Guthrie. With "This Machine Kills Fascists" scrawled across his guitar in big black letters, Woody Guthrie brilliantly captured in song the experience of twentieth-century America. Whether he sang about union organizers, migrant workers, or war, Woody took his inspiration from the plights of the people around him as well as from his own tragic childhood.

From the late 1920s to the 1950s, Guthrie wrote the words to more than three thousand songs--including "This Land is Your Land," a song many call America's unofficial national anthem. With a remarkable ability to turn any experience into a song almost instantaneously, Woody Guthrie spoke out for people of all colors and races, setting an example for generations of musicians to come.

But Woody didn't have the chance to find everything he was looking for. He was ravaged by Huntington's disease, just like his mother, and died in a mental institution at the age of fifty-five.

[This text is listed as an example that meets Common Core Standards in English language arts in grades 6-8 at http://www.corestandards.org.]