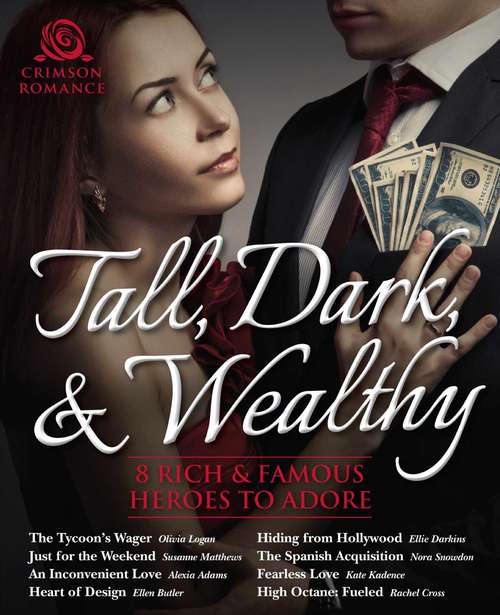 Dashing, handsome, and with money to burn . . . It's a devastatingly sexy combination for these eight successful and commanding heroes as they search for the women who make their lives richer with laughter, passion, and love.The Tycoon's Wager: To boost ratings and save her radio show, agony aunt CJ Stratt has no choice but to agree to a series of publicity dates with London's renowned playboy, Jack Harper. Jack knows seduction, but he has no idea how to love. Love is CJ's business, yet she's never been seduced. Can they find their way to a happily ever after?Just for the Weekend: Multimillionaire Sam Mason is sick of gold diggers. When he meets a role-playing kindergarten teacher at a sci-fi convention in Vegas, she seems like the real thing. Then - surprise! - he wakes up married to this sexy stranger . . . only to find his new bride has vanished. Is he looking for a swindler or the love of his life?An Inconvenient Love: To expand his real estate business, Luca Castellioni needs an English-speaking secretary and a wife, so he strikes a bargain with the first pretty face to cross his path. But now Sophia Stevens fascinates him, and he wants more marriage and not so much convenience in their agreement. Too bad his wife has reconstructed her own life, without him. Can love overcome the obstacles between them?Heart of Design: Hollywood playboy Ian O'Connor has women falling at his feet, but interior designer Sophie Hartland refuses to be one of them. Sophie's a refreshing change from the actress wannabes trying hop aboard Ian's new gravy train of success. But is her disinterest just an Oscar-worthy act?Hiding from Hollywood: When movie producer Ethan Walker walks into Abby's diner, she's terrified. The last thing she wants is her name connected with his when her life is now about hiding from the tabloids. But when she's left without a safe place to stay, Ethan offers her sanctuary in his home, and Abby must decide whether she can finally stop running and trust Ethan with her secret.The Spanish Acquisition: When multibillionaire business mogul Carlos meets struggling art student Lily on vacation in the Dominican Republic, sparks fly. But can they overcome their differences as well as a mix-up of mistaken identity?Fearless Love: Jake Colt has no interest in handling the Carmichael winery acquisition, but he has little choice considering the business agreement he made with his father. Madison Carmichael refuses to let this interloper take what belongs to her family, no matter what passions he stirs in her heart. When two opposing forces clash, sparks are bound to fly . . . High Octane: Fueled: Maddux Bates's Formula One career needs an overhaul this season - not the scandal of an affair with a multimillionaire sponsor's girlfriend. But there's more to Brynn Douglas's story - and motivations - than meets the eye, and the flame between them burns hot. Falling in love on the F1 circuit is a crash course in adrenaline.Sensuality Level: Sensual