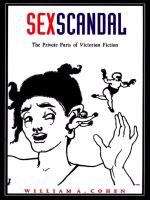 Never has the Victorian novel appeared so perverse as it does in these pages--and never his its perversity seemed so fundamental to its accomplishment. Whether discussing George Eliot's lesbian readers, Anthony Trollope's whorish heroines, or Charles Dickens's masturbating characters, William A. Cohen's study explodes the decorum of mainstream nineteenth-century fiction. By viewing this fiction alongside the most alarming public scandals of the day, Cohen exposes both the scandalousness of this literature and its sexiness.Scandal, then as now, makes public the secret indiscretions of prominent people, engrossing its audience in salacious details that violate the very code of propriety it aims to enforce. In narratives ranging from Great Expectations to the Boulton and Park sodomy scandal of 1870-71, from Eliot's and Trollope's novels about scandalous women to Oscar Wilde's writing and his trials for homosexuality, Cohen shows how, in each instance, sexuality appears couched in coded terms. He identifies an assortment of cunning narrative techniques used to insinuate sex into Victorian writing, demonstrating that even as such narratives air the scandalous subject, they emphasize its unspeakable nature.Written with an eye toward the sex scandals that still whet the appetites of consumers of news and novels, this work is suggestive about our own modes of imagining sexuality today and how we arrived at them. Sex Scandal will appeal to scholars and general readers interested in Victorian literature, the history of sexuality, gender studies, nineteenth-century Britain, and gay, lesbian, and queer studies.