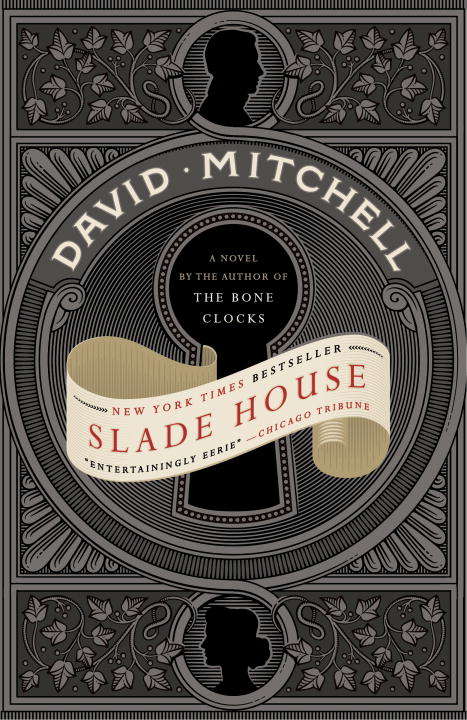 By the New York Times bestselling author of The Bone Clocks and Cloud Atlas | A Publishers Weekly Literary Fiction Top 10 Pick for Fall 2015 Keep your eyes peeled for a small black iron door. Down the road from a working-class British pub, along the brick wall of a narrow alley, if the conditions are exactly right, you'll find the entrance to Slade House. A stranger will greet you by name and invite you inside. At first, you won't want to leave. Later, you'll find that you can't. Every nine years, the house's residents--an odd brother and sister--extend a unique invitation to someone who's different or lonely: a precocious teenager, a recently divorced policeman, a shy college student. But what really goes on inside Slade House? For those who find out, it's already too late. . . . Spanning five decades, from the last days of the 1970s to the present, leaping genres, and barreling toward an astonishing conclusion, this intricately woven novel will pull you into a reality-warping new vision of the haunted house story--as only David Mitchell could imagine it. Praise for Slade House"Devilishly fun."--The Washington Post "Entertainingly eerie . . . Slade House boils down to Mitchell's take on the classic ghost story, complete with his version of a haunted house. . . . The last thing we expected from Mitchell is simplicity, but here it is, burnished to a hellish bronze."--Chicago Tribune "A ripping yarn . . . Like Shirley Jackson's Hill House or the Overlook Hotel from Stephen King's The Shining, [Slade House] is a thin sliver of hell designed to entrap the unwary. . . . As the Mitchellverse grows ever more expansive and connected, this short but powerful novel hints at still more marvels to come."--San Francisco Chronicle"Plants died, milk curdled, and my children went slightly feral as I succumbed to the creepy magic of David Mitchell's Slade House. It's a wildly inventive, chilling, and--for all its otherworldliness--wonderfully human haunted house story. I plan to return to its clutches quite often."--Gillian Flynn, #1 New York Times bestselling author of Gone Girl and The Grownup "I gulped down this novel in a single evening. Painstakingly imagined and crackling with narrative velocity, it's a Dracula for the new millennium, a Hansel and Gretel for grownups, a reminder of how much fun fiction can be."--Anthony Doerr, author of All the Light We Cannot See, winner of the Pulitzer Prize"Mitchell doesn't break rules so much as prove them inhibitors to lively, intelligent fiction."--Dean Koontz, #1 New York Times bestselling author "Mitchell has long been acknowledged as one of the finest--if not the finest--literary minds of his generation, but he's also one of the most suspenseful."--Joe Hill, New York Times bestselling author of NOS4A2 and Horns "Sharp, fast, flat-out spooky, Slade House is such a hypnotic read that you are likely to miss your subway stop in order to keep reading. And by you, I mean me."--Daniel Handler, New York Times bestselling author of the Lemony Snicket seriesFrom the Hardcover edition.