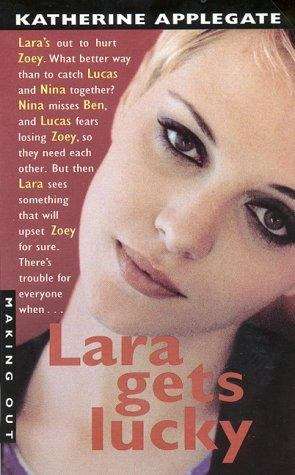 Lara gets lucky when she spots Lucas and Nina alone together. She's been looking for ways to hurt Zoey, and now the people Zoey loves most have played right into Lara's hands. Lara has a dangerous secret--and she intends to use it... Book #23 in the Making Out series answers a lot of questions if you're interested in teenagers, especially teenagers in and out of love. Which guy married at age sixteen? Which girl likes sour cream potato chips? Which boy and girl feel guilty? Which girl is worse than moody? Which boy is in denial? Which girl spills her boy friend's soup on his way to work? Which girl is confused? Which boy has integrity? Which girl is furious enough to break her engagement? Which girl is being stalked and is afraid for her life? Which boy is on a protein diet? Which guy works out to gangsta rap? Which girl wants revenge? Put the whole story together by reading the entire 28 book series available from Bookshare including: #1 Zoey Fools Around, #2 Jake Finds Out, #3 Nina Won't Tell, #4 Ben's In Love, #5 Claire Gets Caught, #6 What Zoey Saw, #7 Lucas Gets Hurt, #8 Aisha Goes Wild, #9 Zoey Plays Games, #10 Nina Shapes Up, #11 Ben Takes A Chance, #12 Claire Can't Lose, #13 Don't tell Zoey, #14 Aaron Lets Go, #15 Who Loves Kate?, #16 Lara Gets Even, #17 Two Timing Aisha, #19 Kate Finds Love, #20 Never Trust Lara, #21 Trouble With Aaron, #22 Always Loving Zoey, #24 Now Zoey's Alone, #25 Don't Forget Lara, #26 Zoey's Broken Heart, #27 Falling for Claire, and last, #28 Zoey Comes Home.