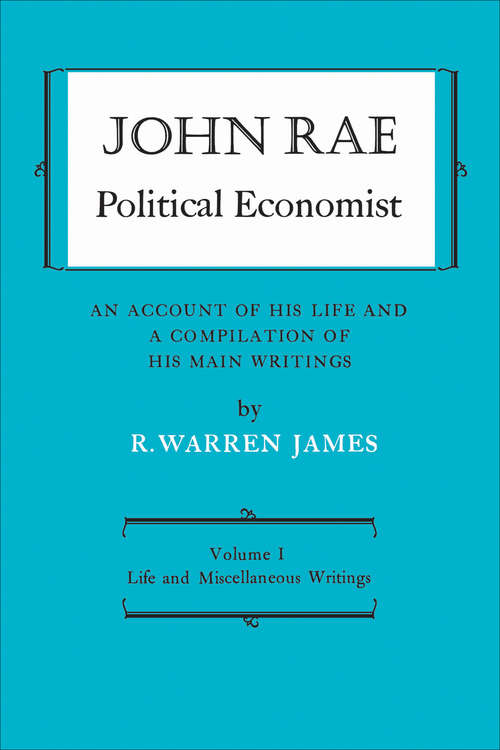 Volume I contains a biographical study of John Rae, a brilliant economist and scholar who lived in Canada for a period in the early part of the nineteenth century, an analysis of Rae's contributions to economics, and a collection of his articles and essays on a variety of topics. These miscellaneous writings, many of which originally appeared in contemporary newspapers and magazines, reveal the broad range of his intellectual interests as well as his polemic and literary skill. Volume II is a reprint of Rae's book Statement of New Principles on the Subject of Political Economy which was originally published in Boston in 1834. As a result of the reissue of this book, which has been scarce for some years, modern students of economics will be better able to appreciate Rae's fundamental contribution to the development of economic thought, particularly the theory of capital.

Much of Rae's analysis of economic development and behaviour was based on a first-hand knowledge of the Canadian economy in the early nineteenth century, but his theory has a surprisingly modern flavour, and is completely relevant to the problems of primitive or emerging economies today. Rae, personally, has been a neglected and obscure figure and one of the main objects of this work is to throw additional light on his career. There were a number of gloomy and disappointing episodes in his life, but, despite them, his devotion to scholarly pursuits remained unimpaired, and his literary output continued throughout his life.

This work should appeal to all those interested in the history of ideas, particularly to those concerned with the economic, political and religious controversies of the first half of the nineteenth century. For his contributions to economic theory John Rae is entitled to a place in the first rank of economists anywhere in the world, and for this reason he deserves the attention of all students of economics and sociology. His work is sprinkled with profound insights into human behaviour and, in addition, he displays a literary style which has seldom been surpassed in the literature of economics.