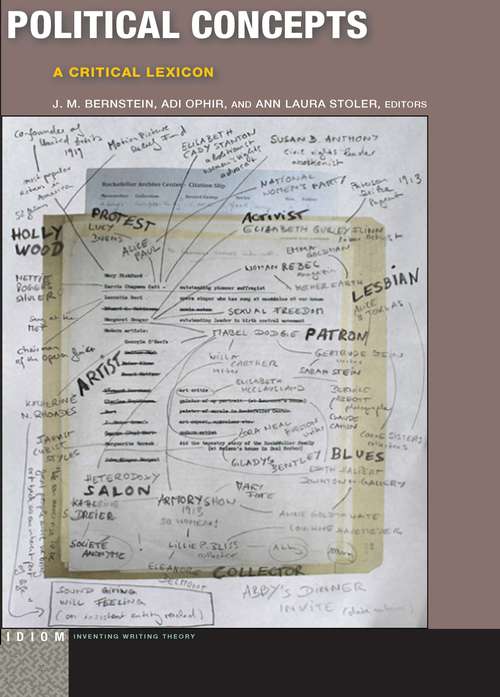 Deciding what is and what is not political is a fraught, perhaps intractably opaque matter. Just who decides the question; on what grounds; to what ends—these seem like properly political questions themselves. Deciding what is political and what is not can serve to contain and restrain struggles, make existing power relations at once self-evident and opaque, and blur the possibility of reimagining them differently. Political Concepts seeks to revive our common political vocabulary—both everyday and academic—and to do so critically. Its entries take the form of essays in which each contributor presents her or his own original reflection on a concept posed in the traditional Socratic question format “What is X?” and asks what sort of work a rethinking of that concept can do for us now.The explicitness of a radical questioning of this kind gives authors both the freedom and the authority to engage, intervene in, critique, and transform the conceptual terrain they have inherited. Each entry, either implicitly or explicitly, attempts to re-open the question “What is political thinking?” Each is an effort to reinvent political writing. In this setting the political as such may be understood as a property, a field of interest, a dimension of human existence, a set of practices, or a kind of event. Political Concepts does not stand upon a decided concept of the political but returns in practice and in concern to the question “What is the political?” by submitting the question to a field of plural contention.The concepts collected in Political Concepts are “Arche” (Stathis Gourgouris), “Blood” (Gil Anidjar), “Colony” (Ann Laura Stoler), “Concept” (Adi Ophir), “Constituent Power” (Andreas Kalyvas), “Development” (Gayatri Spivak), “Exploitation” (Étienne Balibar), “Federation” (Jean Cohen), “Identity” (Akeel Bilgrami), “Rule of Law” (J. M. Bernstein), “Sexual Difference” (Joan Copjec), and “Translation” (Jacques Lezra)