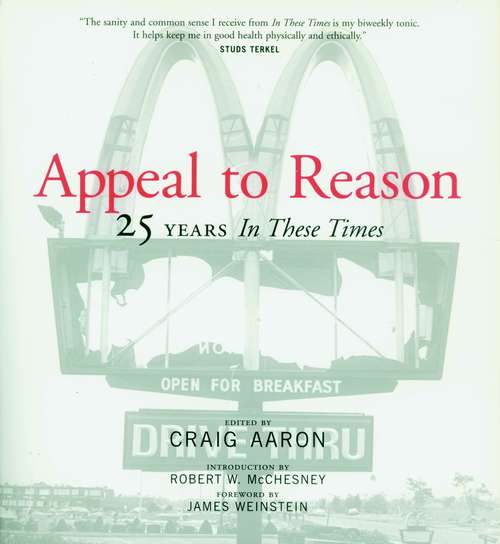 In These Times, the national, biweekly magazine of news and opinion, has provided groundbreaking coverage of the labor movement, the environment, feminism, grassroots politics, minority communities, and the media for twenty-five years. Filled with new writing commissioned specially for this anniversary volume, images, and text highlights of the last quarter-century in the magazine, Appeal to Reason: The First 25 Years of In These Times showcases contributors to the magazine like Noam Chomsky, David Brower, and Alice Walker, to name just a few.

But it also asks an important question: Where do we go from here? For answers, Appeal to Reason turns to more than twenty leading progressive writers—including Barbara Ehrenreich, Juan Gonzalez, Salim Muwakkil, and Robert W. McChesney—who take a fresh look at the lessons of the past and suggest directions for the future. Exploring issues ranging from globalization and criminal justice to the environment and culture, Appeal to Reason lays a political and intellectual foundation for the debates, discussions, and movements of the next twenty-five years.

Copyright:
2001 The Institute for Public Affairs