When You Say Yes But Mean No 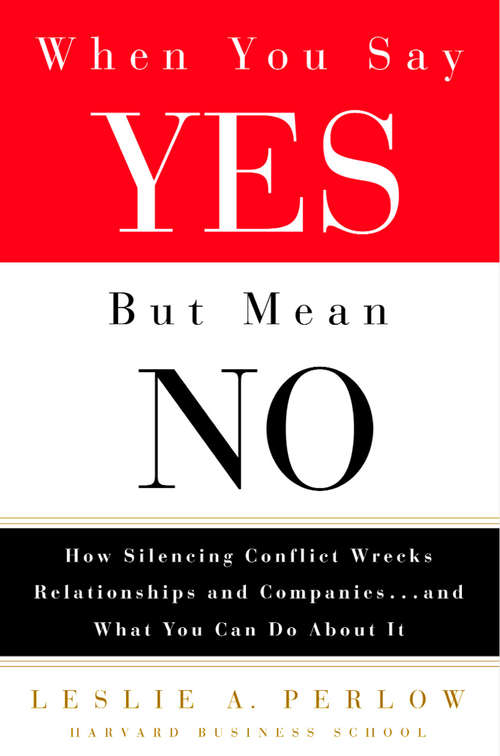 We live in a culture--especially at work--that prefers harmony over discord, agreement over dissent, speed over deliberation. We often smile and nod to each other even though deep down we could not disagree more. Whether with colleagues, friends, or family members, the tendency to paper over differences rather than confront them is extremely common. We believe that the best thing to do to preserve our relationships and to ensure that our work gets done as expeditiously as possible is to silence conflict. Let's face it, most bosses don't encourage us to share our differences. Indeed, many people are taught that loyal employees accept corporate values, policies, and decisions--never challenging or questioning them. If we want to hold on to our jobs and move up in our organizations, stifling conflict is the safest way to do it--or so we believe.And it is not just with our bosses that we fear raising a dissenting opinion. We worry about what our peers and even our subordinates may think of us. We don't want to embarrass ourselves or create a bad impression. We don't want to lose others' respect or risk rejection.We often associate conflict with its negative form--petty bickering, heated arguing, a bloody fight. But conflict can also be a source of creative energy; when handled constructively by both parties, differences can lead to a healthy and fruitful collaboration, creation, or construction of new knowledge or solutions. When we silence conflict, we avoid the possibility of negative conflict, but we also miss the potential for constructive conflict.Worse yet, as Leslie Perlow documents, the act of silencing conflict may create the consequences we most dread. Tasks frequently take longer or never get done successfully, and silencing conflict over important issues with people for whom we care deeply can result in disrespect for, and devaluing of, those same people. Each time we silence conflict, we create an environment in which we're all the more likely to be silent next time. We get caught in a vicious "silent spiral," making the relationship progressively less safe, less satisfying, and less productive. Differences get glossed over, patched over, and suppressed . . . until disaster happens. "Saying yes when you really mean no" is a problem that haunts organizations from start-ups to multi-nationals. It exists across industries, levels, and functions. And it's exacerbated by a down economy, when the fear of losing one's job is on everybody's mind and the idea of allowing conflict to surface or disagreeing with others seems particularly risky. All too often, the conversation at work bespeaks harmony and togetherness, even though passionate disagreements exist beneath the surface. Leslie A. Perlow is a corporate ethnographer, an anthropologist of corporate culture. Anthropologists like Margaret Mead spend years in the field studying exotic cultures. Perlow does the same, although the field for her is the office and the exotic people are us--those who work in the world of organizations. But the end result is no less surprising or rich in insight. Whether it's a Fortune 500 firm, small business, or government bureaucracy, Perlow provides a keen understanding of the hidden issues behind what people say (and don't say). And more important, she shows how to create relationships where individuals feel empowered to express their genuine thoughts and feelings and to harness the power of positive conflict.From the Hardcover edition.