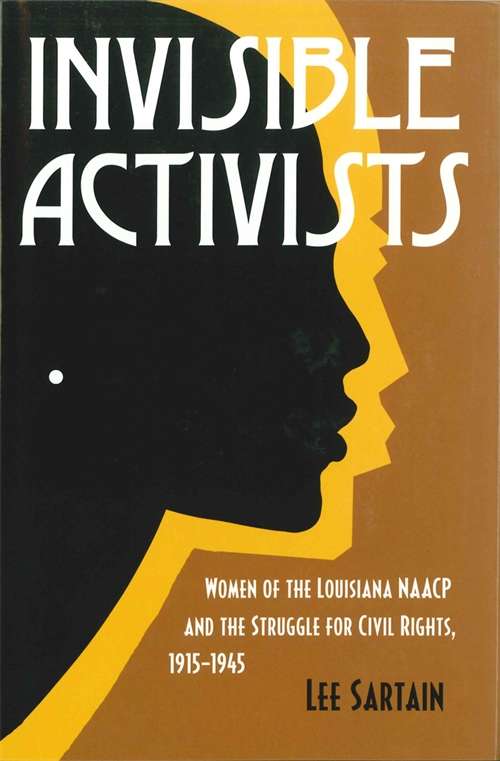 Behind the historical accounts of the great men of the National Association for the Advancement of Colored People lies the almost forgotten story of the black women who not only participated in the organization but actually helped it thrive in the early twentieth-century South. In Invisible Activists, Lee Sartain examines attitudes toward gender, class, and citizenship of African American activists in Louisiana and women's roles in the campaign for civil rights in the state. In the end, he argues, it was women working behind the scenes in Louisiana's branches of the NAACP who were the most crucial factor in the organization's efficiency and survival. During the first half of the twentieth century -- especially in the darkest days of the Great Depression, when membership waned and funds were scarce -- a core group of women maintained Louisiana's NAACP. Fighting on the front line, Sartain explains, women acted as grassroots organizers, running public relations campaigns and membership drives, mobilizing youth groups, and promoting general community involvement. Using case studies of several prominent female NAACP members in Louisiana, Sartain demonstrates how women combined their fundraising skills with an extensive network of community and family ties to fund the NAACP and, increasingly, to undertake the day-to-day operations of the local organizations themselves. Still, these women also struggled against the double obstacles of racism and sexism that prevented them from attaining the highest positions within NAACP branch leadership. Sartain illustrates how the differences between the sexes were ultimately woven into the political battle for racial justice, where women were viewed as having inherent moral superiority and, hence, the potential to lift the black population as a whole. Sartain concludes that despite the societal traditions that kept women out of leadership positions, in the early stages of the civil rights movement, their skills and their contributions as community matriarchs provided the keys to the organization's progress. Highly original and essential to a comprehensive study of the NAACP, Invisible Activists gives voice to the many individual women who sustained the influential civil rights organization during a time of severe racial oppression in Louisiana. Without such dedication, Sartain asserts, the organization would have had no substantial presence in the state.