From Slave to Soldier 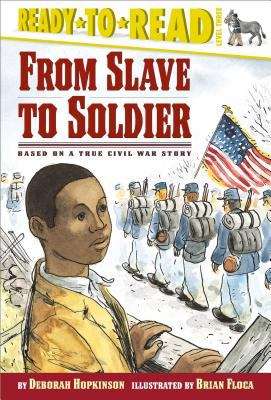 During the Civil War, African Americans struggled to be accepted as soldiers. From Slave to Soldier is fiction, but it is based on the true story of a boy named John McCline, who was enslaved on a Tennessee plantation until the age of eleven. One day in 1862 he ran away and joined a passing group of Union soldiers in the Thirteenth Michigan Infantry Regiment. Young John became a mule-team driver's helper in the Union army until the end of the Civil War.

After the war John went to school and worked in hotels. In 1892 he went to work for the family of Herbert Hagerman and moved to Santa Fe, New Mexico. Around 1930 McCline showed his handwritten memoir of his early years to Hagerman, who typed it and wrote an introduction. Although it did not become a book during McCline's life, the typed copy was kept in his family and published by the University of Tennessee Press in 1998. McCline married at age eighty-six and died in 1948, when he was about ninety-five.

This story is based on McCline's memory of driving a wagon alone to bring supplies to the battlefield. Years after his war experiences McCline remembered the names of all his mules, and they have not been changed in this story. Many blacks in the Union army were not treated as kindly as young McCline was. But John McCline's incredible memory for detail helps us better understand what life was like for one boy who went from being "a slave to a soldier."