The Annual of Psychoanalysis, V. 31 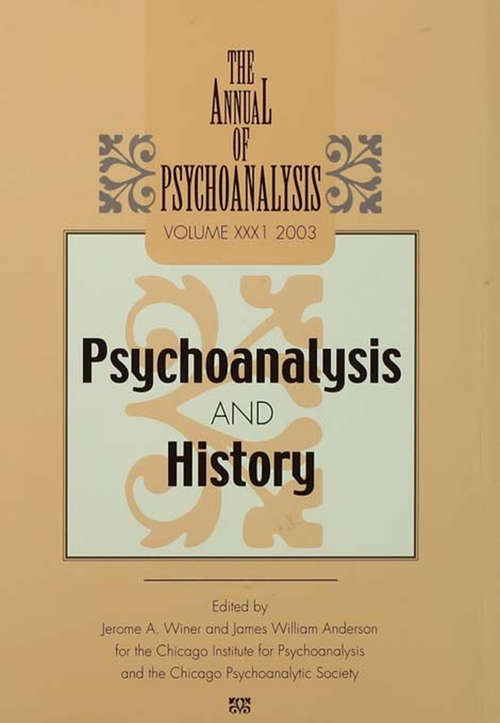 By: Jerome A. Winer • James William Anderson
Login
Sign Up

In 1958 William L. Langer, in a well-known presidential address to the American Historical Association, declared the informed use of psychoanalytic depth psychology as "the next assignment" for professional historians.  Psychoanalysis and History, volume 31 of The Annual of Psychoanalysis, examines the degree to which Langer's directive has been realized in the intervening 45 years. Section I makes the case for psychobiography in the lives of historical figures and exemplifies this perspective with analytically informed studies of the art of Wassily Kandinsky; the films of Stanley Kubrick; and the anti-Semitism of Adolf Hitler. Section II reviews Freud's own psychohistorical contributions and then considers the relevance to historical inquiry of the more recent perspectives of Winnicott, Kernberg, and Kohut. Section III explores an intriguing tributary of psychobiographical inquiry: the impact of the biographer's own subjectivity on his or her work.

Section IV turns to a topic of perennial interest: the psychobiographical study of American presidents.  Section V turns to the special challenges of applying psychoanalysis to topics of religious history and includes topical studies of religious figures as disparate as the 15th century Asian Drukpa Kunley and Osama bin Laden.  Section VI focuses on the recent extension of psychohistorical inquiry to groups of people and to cultural phenomena more generally: an investigation of the youth movement in pre-Nazi Germany; consideration of how societies, no less than individuals, reenact and work through traumas over time; and an outline of the role of analysis in constructing a depth-psychological "social psychology" of use to historians.

These papers, no less than those that precede them, are compelling testimony to the claim with which editors James William Anderson and Jerome A. Winer begin the volume, to wit, that "Psychoanalysis would seem to be a resource indispensable to the study of history."

Copyright:
2003 the Institute for Psychoanalysis