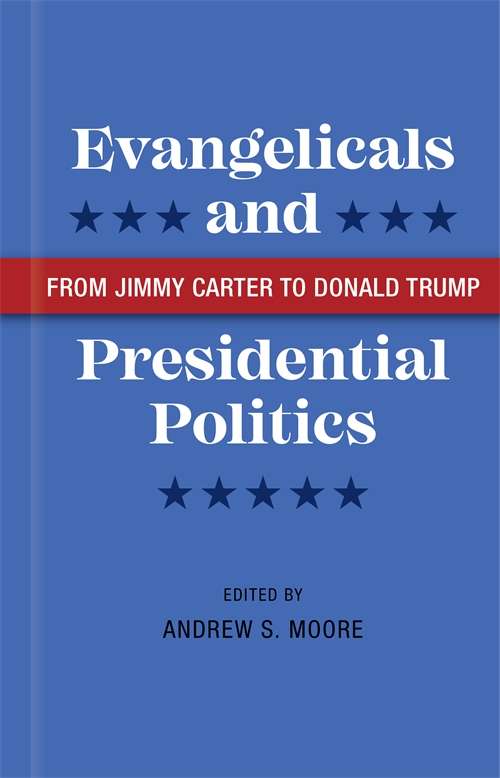 Using as their starting point a 1976 Newsweek cover story on the emerging politicization of evangelical Christians, contributors to Evangelicals and Presidential Politics engage the scholarly literature on evangelicalism from a variety of angles to offer new answers to persisting questions about the movement. The standard historical narrative describes the period between the 1925 Scopes Trial and the early 1970s as a silent one for evangelicals, and when they did re-engage in the political arena, it was over abortion. Randall J. Stephens and Randall Balmer challenge that narrative. Stephens moves the starting point earlier in the twentieth century, and Balmer concludes that race, not abortion, initially motivated activists. In his examination of the relationship between African Americans and evangelicalism, Dan Wells uses the Newsweek story’s sidebar on Black activist and born-again Christian Eldridge Cleaver to illuminate the former Black Panther’s uneasy association with white evangelicals. Daniel K. Williams, Allison Vander Broek, and J. Brooks Flippen explore the tie between evangelicals and the anti-abortion movement as well as the political ramifications of their anti-abortion stance. The election of 1976 helped to politicize abortion, which both encouraged a realignment of alliances and altered evangelicals’ expectations for candidates, developments that continue into the twenty-first century. Also in 1976, Foy Valentine, leader of the Southern Baptist Christian Life Commission, endeavored to distinguish the South’s brand of Protestant Christianity from the evangelicalism described by Newsweek. Nevertheless, Southern Baptists quickly became associated with the evangelicalism of the Religious Right and the South’s shift to the Republican Party. Jeff Frederick discusses evangelicals’ politicization from the 1970s into the twenty-first century, suggesting that southern religiosity has suffered as southern evangelicals surrendered their authenticity and adopted a moral relativism that they criticized in others. R. Ward Holder and Hannah Dick examine political evangelicalism in the wake of Donald Trump’s election. Holder lays bare the compromises that many Southern Baptists had to make to justify their support for Trump, who did not share their religious or moral values. Hannah Dick focuses on media coverage of Trump’s 2016 campaign and contends that major news outlets misunderstood the relationship between Trump and evangelicals, and between evangelicals and politics in general. The result, she suggests, was that the media severely miscalculated Trump’s chances of winning the election.