We Do Our Part 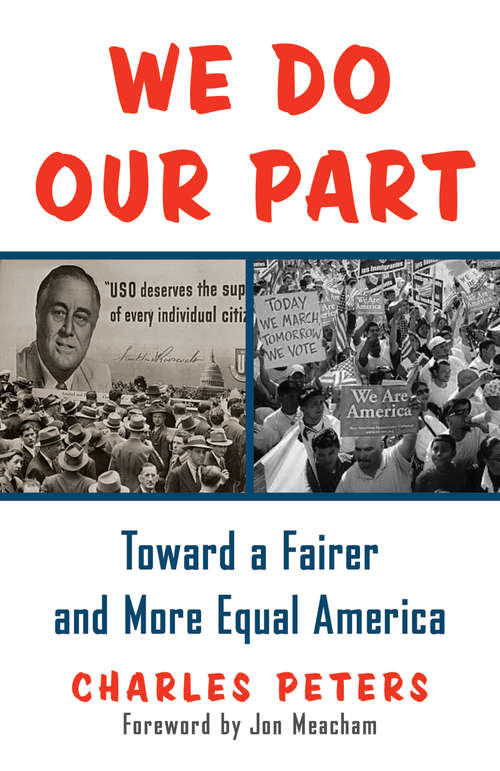 The legendary editor who founded the Washington Monthly and pioneered explanatory journalism trains his keen, principled eye on the changes that have reshaped American politics and civic life beginning with the New Deal. “We Do Our Part” was the slogan of Franklin Delano Roosevelt’s National Recovery Administration—and it captured the can-do spirit that allowed America to survive the Great Depression and win World War II. Although the intervening decades have seen their share of progress as well, in some ways we have regressed as a nation. Over the course of a sixty-year career as a Washington, D.C., journalist, historian, and challenger of conventional wisdom, Charles Peters has witnessed these drastic changes firsthand. This stirring book explains how we can consolidate the gains we have made while recapturing the generous spirit we have lost. In a volume spanning the decades, Peters compares the flood of talented, original thinkers who flowed into the nation’s capital to join FDR’s administration with the tide of self-serving government staffers who left to exploit their opportunities on Wall Street and as lobbyists from the 1970s to today. During the same period, the economic divide between rich and poor grew, as we shifted from a culture of generosity to one of personal aggrandizement. With the wisdom of a prophet, Peters connects these two trends by showing how this money-fueled elitism has diminished our trust in one another and our nation—and changed Washington for the worse. While Peters condemns the crass buckraking that afflicts our capital, and the rampant consumerism that fuels our greed, he refuses to see America’s downward drift as permanent. By reminding us of our vanished civic ideal, We Do Our Part also points the way forward. Peter argues that if we want to revive the ethos of the New Deal era—a time when government attracted the brightest and the most dedicated, and when our laws reflected a spirit of humility and community—we need only demand it of ourselves and our elected officials. With a new administration in Washington, the time is ripe for a reassessment of our national priorities. We Do Our Part offers a vital road map of where we have been and where we are going, drawn from the invaluable perspective of a man who has seen America’s better days and still believes in the promise that lies ahead.