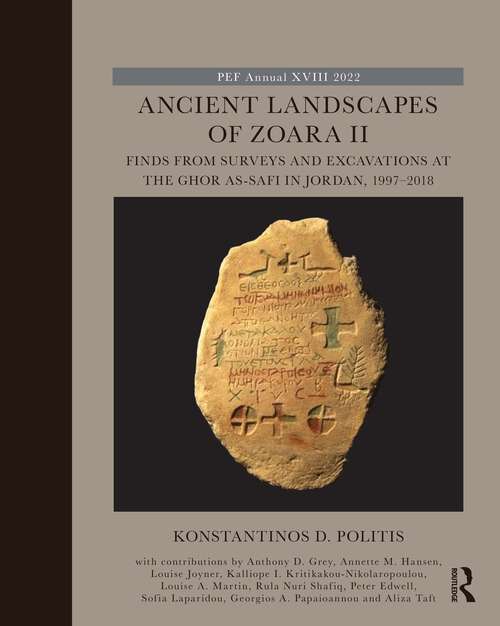 Ancient Landscapes of Zoara II reveals the unique set of objects discovered through the meticulous excavations at the Ghor as-Safi in Jordan. Some of them are unique works of art, but others are no less valuable for the knowledge they hold.

Complementing the previous volume Ancient Landscapes of Zoara I, this book explores Ghor as-Safi’s ancient history and archaeology through the material remains found during excavations. The finds described are from historical periods and include unpublished early Christian and Aramaic inscriptions as well as Arabic writing and graffiti. Newly discovered mosaic pavements are presented along with other noteworthy finds such as glazed imported wares, local industrial pottery, fine glass, an array of coins and specialised metal work. Animal and plant remains testify to varied and rich agricultural regimes which sustained the prosperity of ancient communities. In turn, this affluence seems to have led to a fairly sophisticated and literate society in an otherwise rather desolate environment. Studies on the human remains affirm a robust population.

Ancient Landscapes of Zoara II, as with the previous volume, is aimed at students and researchers of the archaeology of the Near East and the southern Levant in particular. It is also of interest to readers wishing to further their understanding of the region’s medieval cultures, with a focus on material finds from archaeological excavations belonging to the Byzantine and Islamic periods.