A Body Worth Defending 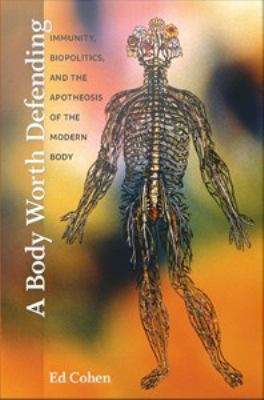 Biological immunity as we know it does not exist until the late nineteenth century. Nor does the premise that organisms defend themselves at the cellular or molecular levels. For nearly two thousand years "immunity," a legal concept invented in ancient Rome, serves almost exclusively political and juridical ends. "Self-defense" also originates in a juridico-political context; it emerges in the mid-seventeenth century, during the English Civil War, when Thomas Hobbes defines it as the first "natural right. " In the 1880s and 1890s, biomedicine fuses these two political precepts into one, creating a new vital function, "immunity-as-defense. " In A Body Worth Defending, Ed Cohen reveals the unacknowledged political, economic, and philosophical assumptions about the human body that biomedicine incorporates when it recruits immunity to safeguard the vulnerable living organism. Inspired by Michel Foucault's writings about biopolitics and biopower, Cohen traces the migration of immunity from politics and law into the domains of medicine and science. Offering a genealogy of the concept, he illuminates a complex of thinking about modern bodies that percolates through European political, legal, philosophical, economic, governmental, scientific, and medical discourses from the mid-seventeenth century through the twentieth. He shows that by the late nineteenth century, "the body" literally incarnates modern notions of personhood. In this lively cultural rumination, Cohen argues that by embracing the idea of immunity-as-defense so exclusively, biomedicine naturalizes the individual as the privileged focus for identifying and treating illness, thereby devaluing or obscuring approaches to healing situated within communities or collectives.