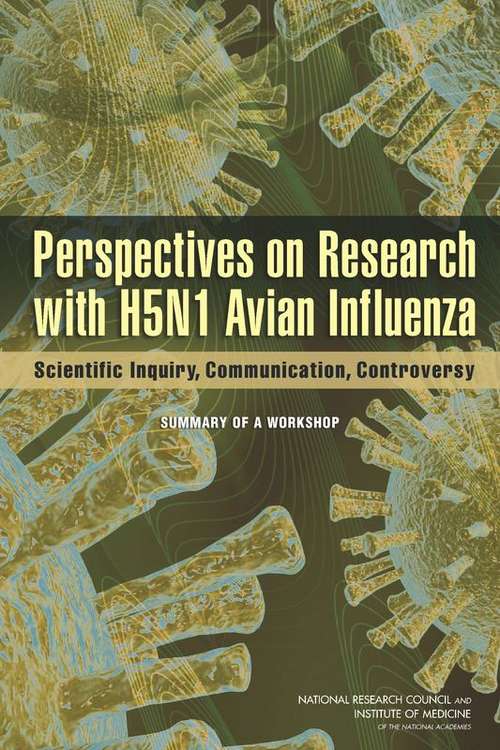 When, in late 2011, it became public knowledge that two research groups had submitted for publication manuscripts that reported on their work on mammalian transmissibility of a lethal H5N1 avian influenza strain, the information caused an international debate about the appropriateness and communication of the researchers' work, the risks associated with the work, partial or complete censorship of scientific publications, and dual-use research of concern in general. Recognizing that the H5N1 research is only the most recent scientific activity subject to widespread attention due to safety and security concerns, on May 1, 2012, the National Research Council's Committee on Science, Technology and Law, in conjunction with the Board on Life Sciences and the Institute of Medicine's Forum on Microbial Threats, convened a one-day public workshop for the purposes of 1) discussing the H5N1 controversy; 2) considering responses by the National Institute of Allergy and Infectious Diseases (NIAID), which had funded this research, the World Health Organization, the U.S. National Science Advisory Board for Biosecurity (NSABB), scientific publishers, and members of the international research community; and 3) providing a forum wherein the concerns and interests of the broader community of stakeholders, including policy makers, biosafety and biosecurity experts, non-governmental organizations, international organizations, and the general public might be articulated. Perspectives on Research with H5N1 Avian Influenza: Scientific Enquiry, Communication, Controversy summarizes the proceedings of the workshop.

Copyright:
2013 the National Academy of Sciences