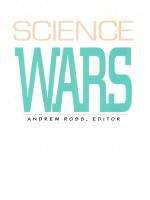 In the wake of the highly fractious Culture Wars, conservatives in science have launched a backlash against feminist, multiculturalist, and social critics in science studies. Paul Gross and Norman Levitt's book Higher Superstition, presented as a wake-up call to scientists unaware of the dangers posed by the "science-bashers," set the shrill tone of this reaction and led to the appearance of a growing number of scare stories about an "antiscience" movement in the op-ed sections of newspapers across the country. Unwilling to be political scapegoats for the decline in the public funding of science and the erosion of the public authority of scientists, many of these critics--natural scientists, sociologists, anthropologists, historians, and scholars in cultural studies and literary studies--have taken the opportunity to respond to the backlash in Science Wars.At a time when scientific knowledge is systematically whisked out of the domain of education and converted into private capital, the essays in this volume are sharply critical of the conservative defense of a value-free science. They suggest that in a world steeped in nuclear, biogenic, and chemical overdevelopment, those who are skeptical of technology are more than entitled to ask for evidence of rationality in those versions of scientific progress that respond only to the managerial needs of state, corporate, and military elites. Whether uncovering the gender-laden assumptions built into the Western scientific method, redefining the scientific claim to objectivity, showing the relationship between science's empirical worldview and that of mercantile capitalism, or showing how the powerful language of science exercises its daily cultural authority in our society, the essays in Science Wars announce their own powerful message. Analyzing the antidemocratic tendencies within science and its institutions, they insist on a more accountable relationship between scientists and the communities and environments affected by their research.Revised and expanded from a recent issue of Social Text, Science Wars will provoke thought and controversy among scholars and general readers interested in science studies and current cultural politics.Contributors. Stanley Aronowitz, Sarah Franklin, Steve Fuller, Sandra Harding, Roger Hart, N. Katherine Hayles, Ruth Hubbard, Joel Kovel, Les Levidow, George Levine, Richard Levins, Richard C. Lewontin, Michael Lynch, Emily Martin, Dorothy Nelkin, Hilary Rose, Andrew Ross, Sharon Traweek, Langdon Winner