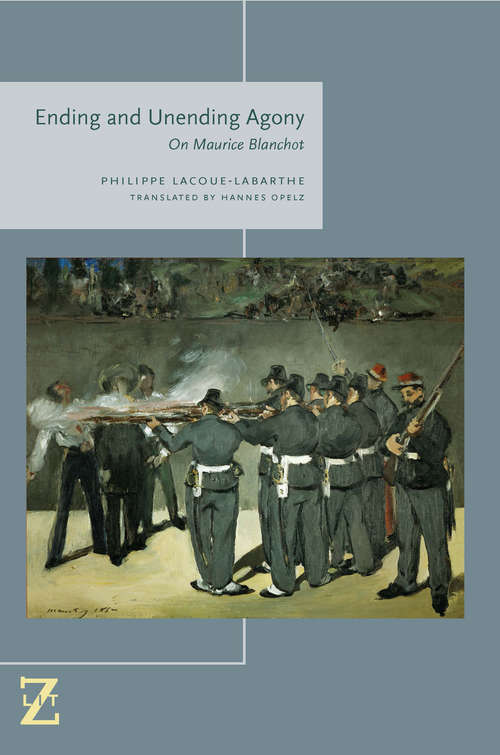 Published posthumously, Ending and Unending Agony is Philippe Lacoue-Labarthe’s only book entirely devoted to the French writer and essayist Maurice Blanchot (1907–2003). The place of Blanchot in Lacoue-Labarthe’s thought was both discreet and profound, involving difficult, agonizing questions about the status of literature, with vast political and ethical stakes.

Together with Plato, Holderlin, Nietzsche, Benjamin, and Heidegger, Blanchot represents a decisive crossroads for Lacoue-Labarthe’s central concerns. In this book, they converge on the question of literature, and in particular of literature as the question of myth—in this instance, the myth of the writer born of the autobiographical experience of death.

However, the issues at stake in this encounter are not merely autobiographical; they entail a relentless struggle with processes of figuration and mythicization inherited from the age-old concept of mimesis that permeates Western literature and culture. As this volume demonstrates, the originality of Blanchot’s thought lies in its problematic but obstinate deconstruction of precisely such processes.

In addition to offering unique, challenging readings of Blanchot’s writings, setting them among those of Montaigne, Rousseau, Freud, Winnicott, Artaud, Bataille, Lacan, Malraux, Leclaire, Derrida, and others, this book offers fresh insights into two crucial twentieth-century thinkers and a new perspective on contemporary debates in European thought, criticism, and aesthetics.