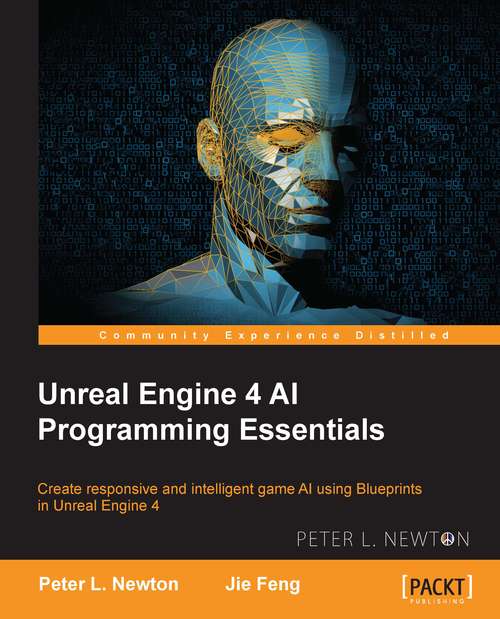 * Understand and apply your Game AI better through various projects such as adding randomness and probability, and introducing movement

Who This Book Is For

This book is for programmers and artists who want to expand their knowledge of Game AI in relation to Unreal Engine 4. You are recommended to have some experience of exploring Unreal Engine 4 prior to this book because we jump straight into Game AI.

What You Will Learn

* Understand the fundamental components of Game AI within Unreal Engine 4

* Configure, customize, and assign Navigation and AI components to your pawn

Unreal Engine is a powerful game development engine that provides rich functionalities to create 2D and 3D games. It is one of the three big game engines used, alongside Unity and CryEngine. Developers have the opportunity to build cross-platform mobile and desktop games from scratch. With Blueprints in Unreal Engine 4, you're able to fully leverage the visual aid that Behavior Trees are built on. Rarely has there been an opportunity to prototype powerful Game AI and have immediate control over constructing, scripting, and viewing the response in a live gaming environment.

This book will show you how to apply artificial intelligence (AI) techniques to your Unreal Script using C++ as your scripting language through multiple projects. With the knowledge gained through this book, you'll be able to leverage the benefits of Unreal Engine 4.

We'll start with an introduction to AI, and you'll learn how it is applied to gaming. Then you'll jump right in and create a simple AI bot and apply basic behaviors to allow it to move randomly. Furthermore, you will get to know the difference between an AI Controller and a Player Controller. As you progress, you'll find out how to implement randomness and probability traits. Using Navmesh, we will impart navigation components such as Character Movement, MoveTo Nodes, Settings, and World Objects, and implement behavior trees. You will see different techniques to sense the environment and create your own sensory system, and will implement Steering Behaviors, Path Following, Avoidance, and Projectiles.

At the end of the book, we will troubleshoot any issues that might crop up while building the entire game.

This easy-to-follow project-based guide throws you directly into the excitement of Game AI in an approachable and comprehensive manner.