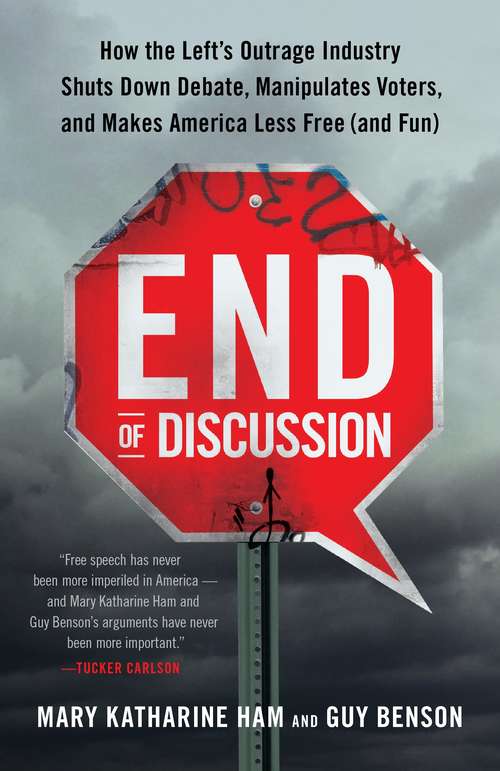 They want to shut you up. But don't let this be the End of Discussion. In this fresh and provocative new book, Mary Katharine Ham and Guy Benson, dynamic Fox News and Townhall Media duo, expose how the Left exploits fake outrage to silence their political opponents--in public, on social media, at work, and even in their own homes. End of Discussion encourages all Americans who value the open exchange of ideas to fight back against this strategic effort to make America less free, less feisty, and less fun. Ham and Benson demonstrate just how dangerous the outrage industry--a coalition of mostly liberal blowhards and busybodies--is to democracy. This media frenzy is designed to disqualify opposing viewpoints on everything from health care to infrastructure to education by labeling them racist, sexist, and evil. They punish speech that makes them uncomfortable, demanding boycotts, firings, regulations, and other economic costs for the sin of disagreeing with them. Instead of engaging in discussion, they seek to win the debate by preventing it from happening. And if you think this behavior is relegated to political fights or politicians, think again. A network of well-trained operatives, nonprofit groups, PR firms, universities, politicians, and "thought leaders" exists to foment outrage over your association with the "wrong" fried chicken joints, Internet browsers, breast cancer charities, pasta, children's toys, Halloween costumes, TV shows, schools, and even comedians' jokes. With Ham and Benson's help, readers can cut through the noise and find their voices again, fighting back against the rampant self-censorship and hair-trigger apologies that always make things worse, not better. With fresh reporting and insightful, occasionally tongue-in-cheek, analysis, End of Discussion is a timely handbook for anyone who wants to make sure debate doesn't meet an ugly death during the 2016 election. Despite President Obama's frequent declarations to the contrary, the time for debate is not over.