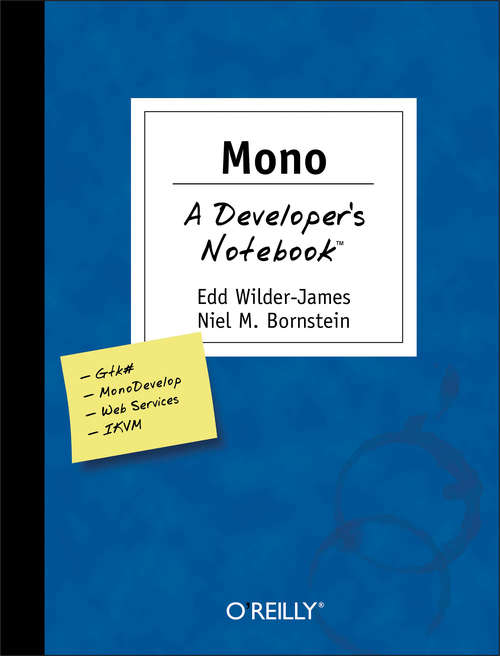 The Mono Project is the much talked-about open source initiative to create a Unix implementation of Microsoft's .NET Development Framework. Its purpose is to allow Unix developers to build and deploy cross-platform .NET applications. The project has also sparked interest in developing components, libraries and frameworks with C#, the programming language of .NET. The controversy? Some say Mono will become the preferred platform for Linux development, empowering Linux/Unix developers. Others say it will allow Microsoft to embrace, extend, and extinguish Linux. The controversy rages on, but--like many developers--maybe you've had enough talk and want to see what Mono is really all about. There's one way to find out: roll up your sleeves, get to work, and see what you Mono can do. How do you start? You can research Mono at length. You can play around with it, hoping to figure things out for yourself. Or, you can get straight to work with Mono: A Developer's Notebook --a hands-on guide and your trusty lab partner as you explore Mono 1.0. Light on theory and long on practical application, Mono: A Developer's Notebook bypasses the talk and theory, and jumps right into Mono 1.0. Diving quickly into a rapid tour of Mono, you'll work through nearly fifty mini-projects that will introduce you to the most important and compelling aspects of the 1.0 release. Using the task-oriented format of this new series, you'll learn how to acquire, install, and run Mono on Linux, Windows, or Mac OS X. You'll work with the various Mono components: Gtk#, the Common Language Runtime, the class libraries (both .NET and Mono-provided class libraries), IKVM and the Mono C# compiler. No other resource will take you so deeply into Mono so quickly or show you as effectively what Mono is capable of. The new Developer's Notebooks series from O'Reilly covers important new tools for software developers. Emphasizing example over explanation and practice over theory, they focus on learning by doing--you'll get the goods straight from the masters, in an informal and code-intensive style that suits developers. If you've been curious about Mono, but haven't known where to start, this no-fluff, lab-style guide is the solution.