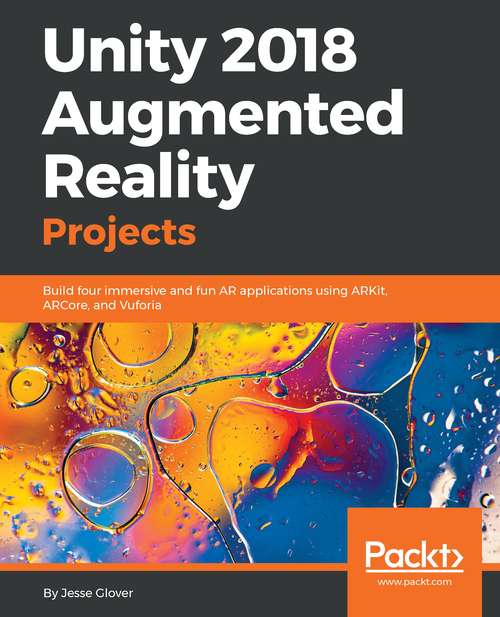 Create engaging Augmented Reality (AR) applications with Unity 3D that can be experienced with devices such as HoloLens and DaydreamKey FeaturesLearn the principles of AR application development Work with the most popular sensors used in AR games and applications across Android, Apple and WindowsBuild experiences with interactive objects, physics, UI, animations, and C# scriptingBook DescriptionAugmented Reality allows for radical innovations in countless areas. It magically blends the physical and virtual worlds, bringing applications from a screen into your hands. Meanwhile, Unity has now become the leading platform to develop augmented reality experiences, as it provides a great pipeline for working with 3D assets.Using a practical and project-based approach, Unity 2018 Augmented Reality Projects educates you about the specifics of augmented reality development in Unity 2018.This book teaches you how to use Unity in order to develop AR applications which can be experienced with devices such as HoloLens and Daydream. You will learn to integrate, animate, and overlay 3D objects on your camera feed, before gradually moving on to implementing sensor-based AR applications. In addition to this, you will explore the technical considerations that are especially important and possibly unique to AR. The projects in the book demonstrate how you can build a variety of AR experiences, whilst also giving insights into C# programming as well as the Unity 3D game engine via the interactive Unity Editor.By the end of the book, you will be equipped to develop rich, interactive augmented reality experiences for a range of AR devices and platforms using Unity.What you will learnBuild and run AR applications for specific headsets, including HoloLens and DaydreamCreate 3D scenes with Unity and other 3D tools while learning about world space and scaleMove around your AR scenes using locomotion and teleportationCreate filters or overlays that work in tandem with facial recognition softwareUse GPS, geolocation services, and the camera feed to create a fitness applicationIntegrate AR and VR concepts together in a single applicationWho this book is forUnity 2018 Augmented Reality Projects is for you if you're a game developer familiar with 3D computer graphics and interested in building your own AR games or applications. Any experience in Unity and C# is an advantage.