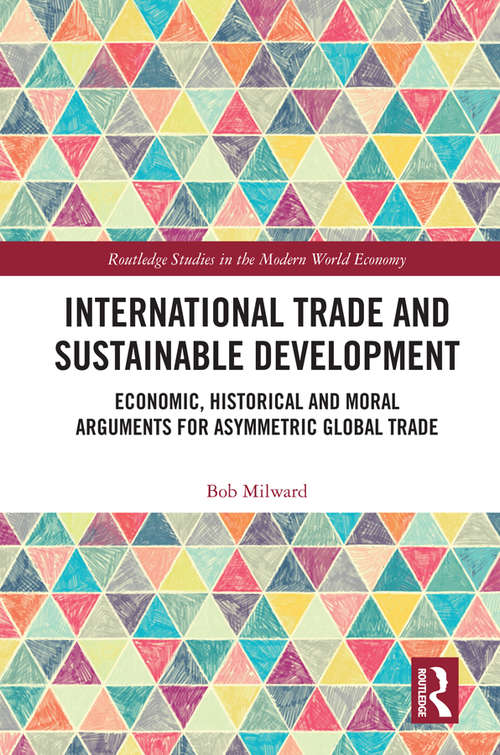 The contemporary orthodox view of world trade has centred, generally unchallenged, on the ideas of free trade, based on the theoretical construct of comparative advantage. This book will engage in a critique of the orthodox position based on the underlying theoretical economic construct, the historical development of the now developed economies and the morally unsustainable position of the free-trade regime.

The author examines alternatives such as Most Favoured Nation and Preferential Trading Agreements before making the argument in favour of Asymmetric Trading, where the underdeveloped economies can develop behind tariff barriers and quotas, whilst the triadic nations maintain a lack of barriers to the exports of these economies. He outlines how such a trading regime would be mutually beneficial in the long term, in the sense that development through industrialisation takes place and the increase in GDP per capita would allow markets for exports to be sustainable, thus widening the market for the goods and services of the developed economies. However, the author demonstrates that free trade actually increases the development gap by maintaining the status quo in terms of the underdeveloped economies specialising in and exporting low value-added primary products and importing high value-added manufactures.

The book analyses contemporary and historical data to illustrate how an alternative trading regime can be truly advantageous to both the developed and underdeveloped regions of the world: a global trading regime that is capable of increasing GDP in a sustainable manner without transferring a surplus from the poor to the rich nations and without a long-term commitment on the part of the developed nations to altruism.

कॉपीराइट:
2020 Bob Milward, The right of Bob Milward to be identified as author of this work has been asserted by him in accordance with sections