Tourism and Change in Polar Regions 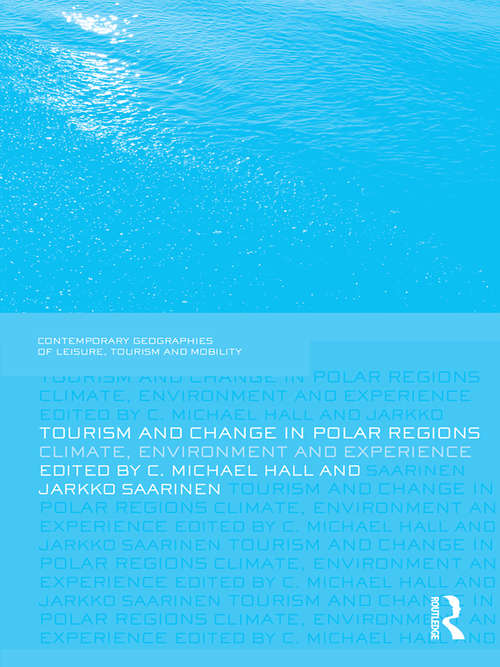 The world’s polar regions are attracting more interest than ever before. Once regarded as barren, inhospitable places where only explorers go, the north and south polar regions have been transformed into high profile tourism destinations, increasingly visited by cruise ships as well as becoming accessible with direct flights. Tourism is seen as one of the few economic opportunities in these regions but at the same time the polar regions are being opened up to tourism development they are being affected by a number of new factors that are interconnected to travel and tourism. Climate change, landscape and species loss, increasing interest in energy resources and minerals, social changes in indigenous societies, and a new polar geopolitics all bring into question the sustainability of polar regions and the place of tourism within them.

This timely volume provides a contemporary account of tourism and its impacts in polar regions. It explores the development and prospects of polar tourism, as well as tourism’s impacts and associated change at high latitudes from environmental, economic, social and political perspectives. It draws on cutting edge research from both the Arctic and Antarctic to provide a comparative review and illustrate the real life issues arising from tourism’s role in these regions. Integrating theory and practice the book fully evaluates varying perspectives on polar tourism and proposes actions that could be taken by local and global management to achieve a sustainable future for polar regions and development of tourism.

This complete and current account of polar tourism issues is written by an international team of leading researchers in this area and will have global appeal to higher level students, researchers, academics in Tourism, Environmental Studies, Arctic/Polar Studies and conservation enthusiasts alike.