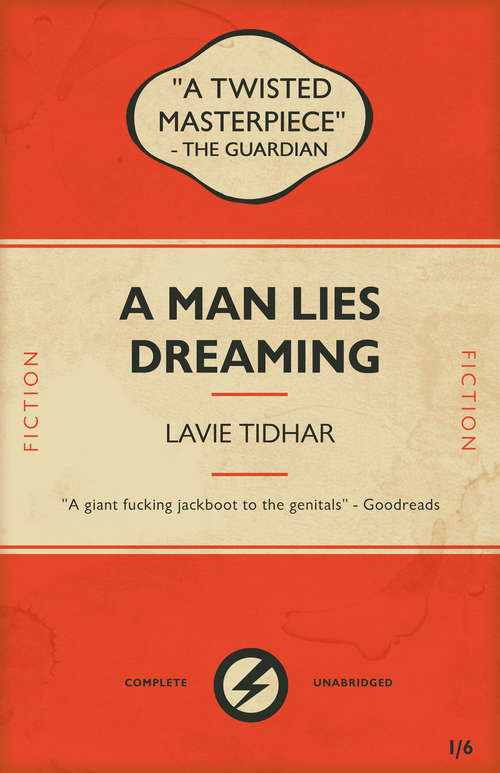 THE CULT NOVEL RETURNS!“The best book I read last year is A Man Lies Dreaming by Lavie Tidhar... It is so cleverly constructed and such a spectacular conclusion unfolds that you are going to take it all very seriously.” – Sting“Ambitious as hell” –Ian Rankin“An excellent novel” –Philip KerrSince its original 2014 publication, A Man Lies Dreaming has been translated into multiple languages and gained a cult following for its dark humor, prescient politics and powerful exploration of the impossibility of fantasy.1939: Adolf Hitler, fallen from power, seeks refuge in a London engulfed in the throes of a very British Fascism. Now eking a miserable living as a down-at-heels private eye and calling himself Wolf, he has no choice but to take on the case of a glamorous Jewish heiress whose sister went missing.It’s a decision Wolf will very shortly regret.For in another time and place a man lies dreaming: Shomer, once a Yiddish pulp writer, who dreams lurid tales of revenge in the hell that is Auschwitz.Prescient, darkly funny and wholly original, the award-winning A Man Lies Dreaming is a modern fable for our time that comes “crashing through the door of literature like Sam Spade with a .38 in his hand” (Guardian).PRAISE FOR LAVIE TIDHARWinner – The World Fantasy AwardWinner – The John W. Campbell AwardWinner – The British Fantasy AwardWinner – The Jerwood Fiction Uncovered PrizeWinner – The Neukom Literary Arts AwardWinner – The Kitschies AwardWinner – The BSFA Award“Tidhar is a genius at conjuring realities that are just two steps to the left of our own.” –NPR “Tidhar changes genres with every outing, but his astounding talents guarantee something new and compelling no matter the story he tells.” –Library Journal “In a genre entirely of his own, and quite possibly a warped genius.” –Ian McDonald, author of River of Gods “Already staked a claim as the genre’s most interesting, most bold, and most accomplished writer.” –Locus “Tidhar is a master at taking concepts that really shouldn’t work and crafting them into something uniquely brilliant.” –GeekDad“He is perhaps the UK’s most literary speculative fiction writer.” –Strange Horizons“Like early Kurt Vonnegut… both writers seem to channel the same prankster glee that covers deep despair.” –Locus“Bears comparison with the best of Philip K Dick” –The Financial TimesPRAISE FOR A MAN LIES DREAMINGJERWOOD FICTION UNCOVERED PRIZE WINNER 2015BRITISH FANTASY AWARD NOMINEE 2015PREMIO ROMA NOMINEE 2016GEFFEN PRIZE NOMINEE 2019DUBLIN LITERATURE AWARD LONGLIST 2016“Complex, elusive and intriguing” –The Jerusalem Post“Nasty, clever, waspish and witty… a brilliant and potent thought experiment” –The Sunday Herald“Bold and unnerving” –NPR“Damn good” –Jewish Book Council“A wholly original Holocaust story: as outlandish as it is poignant.” –Kirkus (starred review)“A vital, brilliant novel” –Barnes & Noble SFF Blog“Outstanding and moving” –Maxim Jakubowski, LoveReading.co.uk“Gripping… clever and thrilling work” –Buzz Magazine“In turns brutal, harrowing, heartbreaking and intriguing…. [an] unforgettable novel.” –Gulf Weekly“poetic & terrible… quite incredible” –Tor.com“A brilliant novel.” –Pop Verse눀