The Psychology of Closed Mindedness 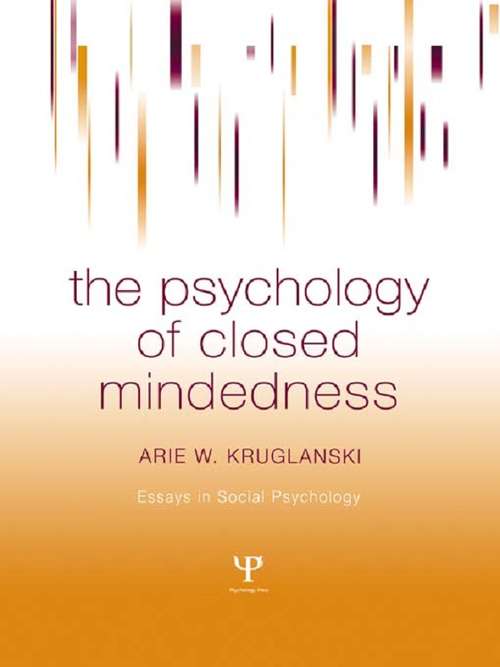 The fundamental phenomenon of human closed-mindedness is treated in this volume. Prior psychological treatments of closed-mindedness have typically approached it from a psychodynamic perspective and have viewed it in terms of individual pathology. By contrast, the present approach stresses the epistemic functionality of closed-mindedness and its essential role in judgement and decision-making. Far from being restricted to a select group of individuals suffering from an improper socialization, closed-mindedness is something we all experience on a daily basis. Such mundane situational conditions as time pressure, noise, fatigue, or alcoholic intoxication, for example, are all known to increase the difficulty of information processing, and may contribute to one's experienced need for nonspecific closure. Whether constituting a dimension of stable individual differences, or being engendered situationally - the need for closure, once aroused, is shown to produce the very same consequences. These fundamentally include the tendency to 'seize' on early, closure-affording 'evidence', and to 'freeze' upon it thus becoming impervious to subsequent, potentially important, information. Though such consequences form a part of the individual's personal experience, they have significant implications for interpersonal, group and inter-group phenomena as well. The present volume describes these in detail and grounds them in numerous research findings of theoretical and 'real world' relevance to a wide range of topics including stereotyping, empathy, communication, in-group favouritism and political conservatism. Throughout, a distinction is maintained between the need for a nonspecific closure (i.e., any closure as long as it is firm and definite) and needs for specific closures (i.e., for judgments whose particular contents are desired by an individual).Theory and research discussed in this book should be of interest to upper level undergraduates, graduate students and faculty in social, cognitive, and personality psychology as well as in sociology, political science and business administration.