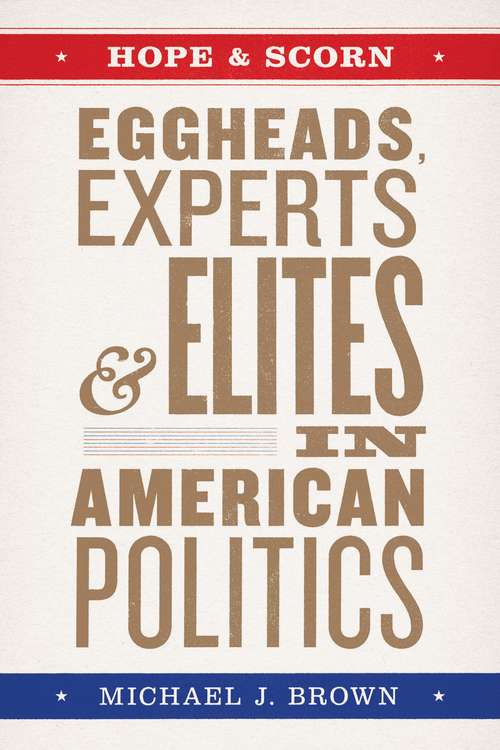 Intellectuals “have been both rallying points and railed against in American politics, vessels of hope and targets of scorn,” writes Michael J. Brown as he invigorates a recurrent debate in American life: Are intellectual public figures essential voices of knowledge and wisdom, or out-of-touch elites? Hope and Scorn investigates the role of high-profile experts and thinkers in American life and their ever-fluctuating relationship with the political and public spheres.

From Eisenhower’s era to Obama’s, the intellectual’s role in modern democracy has been up for debate. What makes an intellectual, and who can claim that privileged title? What are intellectuals’ obligations to society, and how, if at all, are their contributions compatible with democracy? For some, intellectuals were models of civic engagement. For others, the rise of the intellectual signaled the fall of the citizen. Carrying us through six key moments in this debate, Brown expertly untangles the shifting anxieties and aspirations for democracy in America in the second half of the twentieth century and beyond. Hope and Scorn begins with “egghead” politicians like Adlai Stevenson; profiles scholars like Richard Hofstadter and scholars-turned-politicians like H. Stuart Hughes; and ends with the rise of public intellectuals such as bell hooks and Cornel West. In clear and unburdened prose, Brown explicates issues of power, authority, political backlash, and more. Hope and Scorn is an essential guide to American concerns about intellectuals, their myriad shortcomings, and their formidable abilities.

कॉपीराइट:
2020 The University of Chicago Press