Yolks on You Box Set 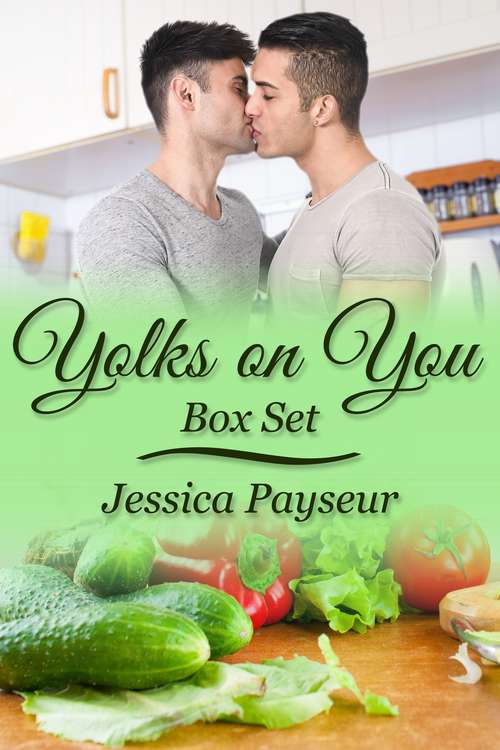 Mount Angus is a small Wisconsin town that would be boring if not for its many over-the-top holiday festivals. Kiko Cooper is a local owner of the niche egg-themed store Yolks on You. Dominic Grady is a tourist who finds himself suddenly single while on vacation. What starts with a bad break up quickly spirals into new romance, intrigue, and murder.Neither Kiko nor Dom can resist the pull of a good mystery any more than they can resist the attraction they feel for each other. Surprising everyone in town, they make a cute couple, and a decent investigative team, too. Which is a good thing, because Mount Angus appears to have a small murder problem ...Contains the stories:Shell Shocked: When Dominic agreed to join his boyfriend for a weekend away at the annual Eggstravaganza in small town Wisconsin, he was expecting a boring experience. He was not expecting to discover his boyfriend had been cheating on him. He was not expecting to fall for Kiko, owner of the niche shop Yolks on You. And he certainly wasn’t expecting an exploding cow to drop him in the middle of a deadly mystery.Egg Whites and Blue: Kiko and Dom are still getting used to each other, and with Mount Angus’ Knee High 4th of July Festival approaching, they anticipate spending quality time together, if only for a weekend. But with the arrival of Kiko’s ex and the discovery of a murdered body, they are drawn into another small-town mystery where dark secrets and a generous serving of danger could very well get them killed.Deal with the Deviled Eggs: After a chaos-filled summer, Kiko and Dom are ready to ease into a more laid back autumn and really put in some quality time together. But with an old friend of Dom's crashing with them and causing tension and a sudden spree of murders, this could either be a Halloween for Kiko and Dom to remember, or their very last.Egg the Halls: When local artist Cat asks Kiko and Dom to solve her vandalism problem, the two are only too happy for the distraction from holiday visitors. But when the property damage escalates to threats on Kiko's life, things get more serious than they'd hoped, and if they can't get to the bottom of the family drama fast, Kiko might never be home for the holidays again.Eggs and Kisses: The annual Be Mount Valentine Heartstival has the whole town of Mount Angus on the lookout for relationship drama, and this year it seems everyone's most interested in whether Kiko and Dom are going to tie the knot. When a body is found rolled in a rug, though, it's up to the couple to unravel a deadly mystery before the celebration ends in more than just bruised egos and broken hearts.