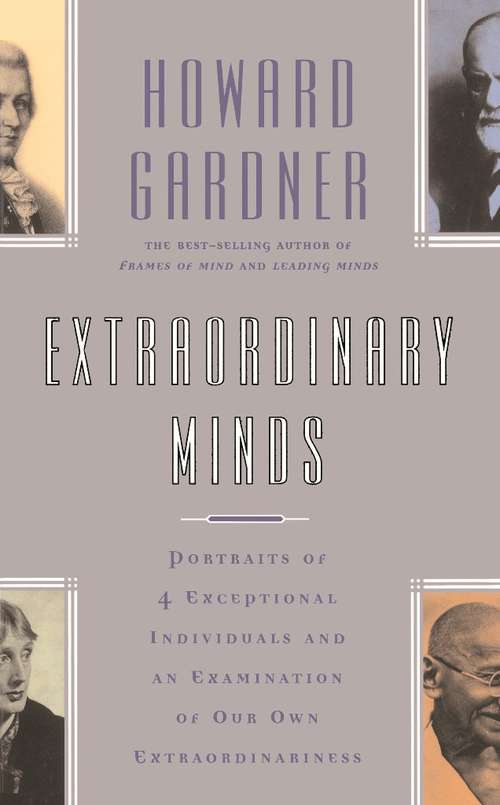 Fifteen years ago, psychologist and educator Howard Gardner introduced the idea of multiple intelligences, challenging the presumption that intelligence consists of verbal or analytic abilities onlythose intelligences that schools tend to measure. He argued for a broader understanding of the intelligent mind, one that embraces creation in the arts and music, spatial reasoning, and the ability to understand ourselves and others. Today, Gardner’s ideas have become widely acceptedindeed, they have changed how we think about intelligence, genius, creativity, and even leadership, and he is widely regarded as one of the most important voices writing on these subjects. Now, in Extraordinary Minds, a book as riveting as it is new, Gardner poses an important question: Is there a set of traits shared by all truly great achieversthose we deem extraordinaryno matter their field or the time period within which they did their important work?In an attempt to answer this question, Gardner first examines how most of us mature into more or less competent adults. He then examines closely four persons who lived unquestionably extraordinary livesMozart, Freud, Woolf, and Gandhiusing each as an exemplar of a different kind of extraordinariness: Mozart as the master of a discipline, Freud as the innovative founder of a new discipline, Woolf as the great introspector, and Gandhi as the influencer. What can we learn about ourselves from the experiences of the extraordinary? Interestingly, Gardner finds that an excess of raw power is not the most impressive characteristic shared by superachievers; rather, these extraordinary individuals all have had a special talent for identifying their own strengths and weaknesses, for accurately analyzing the events of their own lives, and for converting into future successes those inevitable setbacks that mark every life. Gardner provides answers to a number of provocative questions, among them: How do we explain extraordinary timesAthens in the fifth century B. C. , the T’ang Dynasty in the eighth century, Islamic Society in the late Middle Ages, and New York at the middle of the century? What is the relation among genius, creativity, fame, success, and moral extraordinariness? Does extraordinariness make for a happier, more fulfilling life, or does it simply create a special onus?