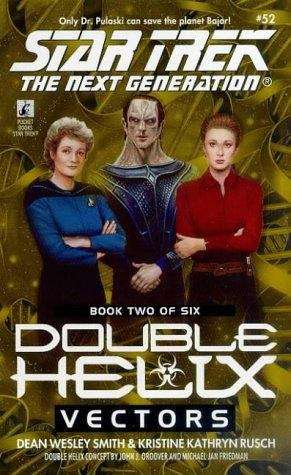 Like a strand of mutating DNA, a deadly conspiracy winds its way

through the entire Alpha Quadrant, just as it stretches across several

years of Starfleet history -even to the Cardassian space station that

will someday be known as Deep Space Nine.

A virulent plague has stricken Terok Nor, striking down both the

enslaved Bajorans and Cardassian oppressors, who blame each other for

the growing epidemic. Dr. Katherine Pulaski, late of the Starship

Enterprise, must work with the tyrannical Gul Dukat, as well as a

rebel spy named Kira Nerys, to discover the true source of an infection

that threatens them all!

Star Trek : The Next Generation, No 52

"My name doesn't matter," Kira Nerys said. "And I don't have a lot of

time, so please listen to me. I would like you to come with me to

Pulaski frowned. "I've already been through this with Gul Dukat. I'm

afraid I can't leave the station."

"He doesn't have to know," Kira said. "I'll smuggle you down there and

I'll bring you back."

Pulaski held up her hand. "I'm sorry," she said.

"No." Kira clenched her fists. "I won't take no for an answer. I