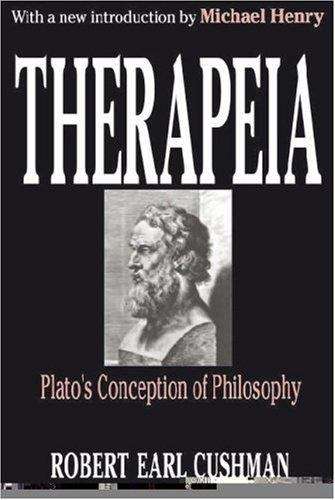 "This reviewer has no doubts that Dr. Cushman has written a controversial book on Plato and in doing so has not only shown impressive familiarity with solid Platonic literature but is also very much at home with all the dialogues and salient passages bearing upon his thesis. "-John P. Anton, Ohio Wesleyen University "Whoever the reader is, he will find a hearty incitement to the articulation of ideas that American thought needs. "-L. W. Norris, Saturday Review Although modernity often seems to be crisis-ridden, human history shows that every age is beset by problems. These are rooted in the human psyche and derive from man's "divorce from his ground of Being. " Cushman's superb study of Plato illuminates how a transcendentally open soul deals with the universal resolution of humanity's most basic spiritual disorder. In Therapeia Cushman focuses on Plato's central theme: the soul's search for ultimate fulfillment and salvation from psychological, social, and political disorders. His detailed analysis begins with the critical importance of Socrates as the ideal of the well ordered and rightly oriented soul, an then considers the essential ontological interdependence of virtue and knowledge. He explores the meaning of anamnesis, eros, and inner conversion, the epistemological value of right belief and its relation to true knowledge, and the proper and improper uses of rhetoric, so that the soul might finally attain the wisdom that flows from its natural affinity for the Good. Cushman regarded Therapei a as his greatest achievement. It is clear that he inhabited Plato's mind and steeped himself in Plato's thoughts, while paying due regard to numerous other commentaries on Plato. His purpose, simple in conception but extraordinarily difficult in execution, is to communicate an intense awareness of Plato's thought as a living philosophy. One of the most profound and luminous books about Plato, this book will be of interest to philosophers, philosophy students (graduate and undergraduate), and anyone interested in philosophy in general and/or Plato in particular. Robert Earl Cushman (1913-1993) was research professor emeritus of Systematic Theology and dean of the Divinity School of Duke University. He was the author of Faith Seeking and Understanding, John Wesley's Experimental Divinity: Studies in Methodist Doctrinal Standards, and The Heritage of Christian Thought. Michael Henry studied with Gerhart Niemeyer at Notre Dame where he received his advanced degree in political theory in 1974. Since 1977, he has been teaching philosophy at St. John's University in New York.