Ragtime, The March, and Homer & Langley 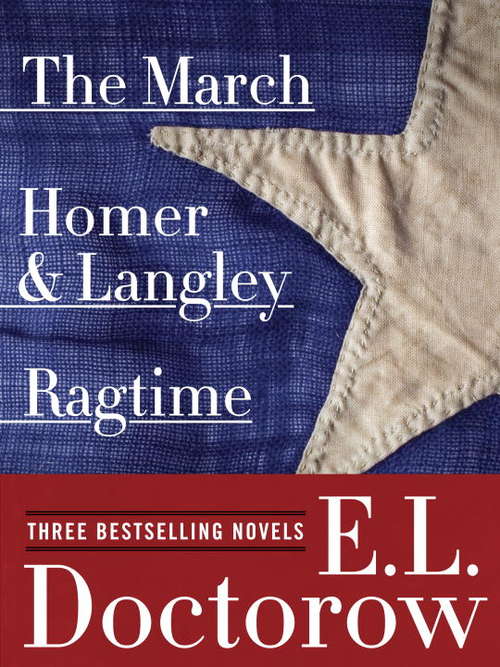 E. L. Doctorow has been hailed as "a writer of dazzling gifts and boundless imaginative energy" (Joyce Carol Oates, The New Yorker), "a virtuosic storyteller with enormous range" (People), and "a national treasure" (George Saunders). He has achieved a distinguished standing in American letters with his profound fiction, novels of great inventive power. The three bestsellers in this eBook bundle are classic Doctorow. From the defining moments of the Civil War to the heady days of the young twentieth century, the subjects and themes herein span, in the words of Don DeLillo, "the reach of American possibility, in which plain lives take on the cadences of history." RAGTIME "An extraordinarily deft, lyrical, rich novel that catches the spirit of the country . . . in a fluid musical way that is as original as it is satisfying."--The New Yorker One lazy Sunday afternoon in 1906 in New Rochelle, New York, the famous escape artist Harry Houdini swerves his car into a telephone pole outside the home of an affluent American family. Almost magically, the line between fact and fiction, between real and invented characters, disappears. Henry Ford, Emma Goldman, J. P. Morgan, Evelyn Nesbit, Sigmund Freud, and Emiliano Zapata slip in and out of the tale, crossing paths with Doctorow's brilliant fictional creations, including an immigrant Jewish peddler and a ragtime pianist from Harlem whose insistence on a point of justice brings this shimmering masterpiece to a shocking climax. THE MARCH "Spellbinding . . . a ferocious re-imagining of the past that returns it to us as something powerful and strange."--Time In 1864, Union general William Tecumseh Sherman marched his sixty thousand troops through Georgia to the sea, and then up into the Carolinas. The army fought off Confederate forces, demolished cities, and accumulated a borne-along population of freed blacks and white refugees until all that remained was the dangerous transient life of the dispossessed and the triumphant. In Doctorow's hands the great march becomes a floating world, a nomadic consciousness, and an unforgettable reading experience with awesome relevance to our own times. HOMER & LANGLEY "Beautiful and haunting . . . one of literature's most unlikely picaresques, a road novel in which the rogue heroes can't seem to leave home."--The Boston Globe Homer and Langley Collyer are brothers--the one blind and deeply intuitive, the other damaged into madness by mustard gas in the Great War. They live as recluses in their once grand Fifth Avenue mansion, hoarding the daily newspapers as research for Langley's proposed dateless newspaper whose reportage will be as prophecy. Even though they want nothing more than to shut out the world, history seems to pass through their cluttered house in the persons of immigrants, prostitutes, society women, government agents, gangsters, jazz musicians . . . and their housebound lives are fraught with odyssean peril as they struggle to survive and create meaning for themselves.