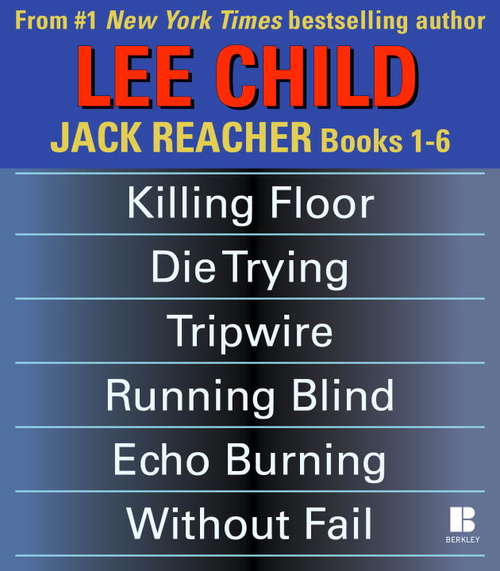 For the first time--the first six explosive novels in Lee Child's #1 New York Times bestselling Jack Reacher series--now together in one e-book package! He never looks for trouble... But trouble never stops looking for him. KILLING FLOOR Ex-military policeman Jack Reacher isn't in the small town of Margrave, Georgia for less than an hour before he's arrested for murder. Not much of a welcome. All Reacher knows is that he didn't kill anybody. At least not lately. But he doesn't stand a chance of convincing anyone. Not a chance in hell... DIE TRYING When a woman is kidnapped off a Chicago street in broad daylight, Jack Reacher is unlucky enough to be taken with her. They're at the mercy of a group of men demanding an impossible ransom. Because Reacher's female companion is worth more than he imagines. Now he has to save them both--from the inside out--or die trying... TRIPWIRE Reacher's anonymity in Florida is shattered by an investigator who's looking for him. But soon after his arrival, the man is murdered. Retracing the PI's trail back to New York, Reacher wants to find out who was looking for him--and why. But he never expected the reasons to be so personal...or lethal. RUNNING BLIND Across the country, women are being murdered, victims of a disciplined and clever killer who leaves no evidence, no fatal wounds, no signs of struggle, and no apparent motive. They are truly perfect crimes. In fact, there's only one thing that links the victims...Jack Reacher.ECHO RUNNING Thumbing across the scorched Texas desert, Jack Reacher has nowhere to go and all the time in the world to get there. Cruising the same stretch of two-lane blacktop is Carmen Greer. For Reacher, a lift comes with a hitch. Carmen's got a wild story--about her husband, her family, and a hometown that's pure gothic. She's also got a plan for all of them. And now Reacher's part of it... WITHOUT FAIL Skilled, cautious, and anonymous, Jack Reacher is perfect for the job: assassinate the vice president of the United States. In theory, that is. A female Secret Service agent wants Reacher to find the holes in her system, and fast--because a covert group already has the vice president in their sights. And they've planned for everything...except for Reacher.