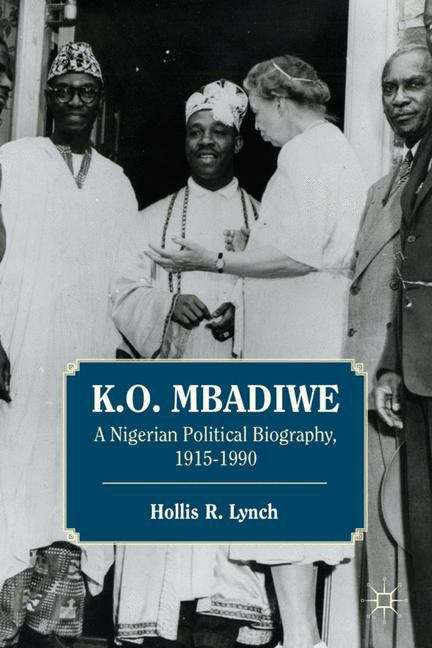 This book offers a comprehensive political biography of Kingsley Ozuomba Mbadiwe, (1915-1990), a central figure in Nigerian political history for more than forty years. Starting in 1936 as a prot#65533;g#65533; of Nnamdi Azikiwe, then Nigeria's most renowned nationalist, Mbadiwe himself by the 1950s became a frontline nationalist. And next to Tafawa Balewa from the North who became Prime Minster in 1957, he was the most important figure in the Nigerian Federal Government between 1952 and Nigeria's first military coup in 1966. During this time he held a succession of important Cabinet positions and was Parliamentary Leader of the National Council of Nigeria and the Cameroons (NCNC), which was in a ruling alliance with the Northern People's Congress (NPC). In contrast, his older prominent political contemporaries, Azikiwe of the Eastern Region, Igbo Leader of the NCNC; Obafemi Awolowo of the Western Region, Yoruba Leader of the Action Group (AG); and Ahmadu Bello of the Northern Region, Fulani Leader of the NPC, all carved out their political careers totally or largely at the regional level. Throughout his political career Mbadiwe's focus was always at the national level. Truly, it has been stated that Mbadiwe was one of the founding fathers of the Nigerian State. Nonetheless, Mbadiwe's ambition for himself to lead Nigeria and for his nation to set it on the path to greatness faced insuperable difficulties. In a country of widespread poverty, high illiteracy, and a grossly underdeveloped private sector, there were fierce ethnic and regional conflicts for the control of governments and resources, leading to massive corruption and serious instability. This in turn led to prolonged military rule twenty years in Mbadiwe's lifetime which was often more corrupt and repressive than civilian rule, and was bitterly deprecated by Mbadiwe.