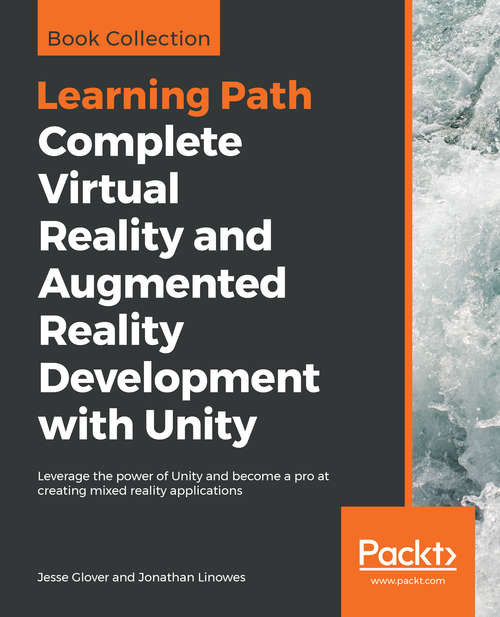 Get close and comfortable with Unity and build applications that run on HoloLens, Daydream, and Oculus RiftKey FeaturesBuild fun augmented reality applications using ARKit, ARCore, and VuforiaExplore virtual reality by developing more than 10 engaging projects Learn how to integrate AR and VR concepts together in a single applicationBook DescriptionUnity is the leading platform to develop mixed reality experiences because it provides a great pipeline for working with 3D assets.Using a practical and project-based approach, this Learning Path educates you about the specifics of AR and VR development using Unity 2018 and Unity 3D. You’ll learn to integrate, animate, and overlay 3D objects on your camera feed, before moving on to implement sensor-based AR applications. You’ll explore various concepts by creating an AR application using Vuforia for both macOS and Windows for Android and iOS devices. Next, you’ll learn how to develop VR applications that can be experienced with devices, such as Oculus and Vive. You’ll also explore various tools for VR development: gaze-based versus hand controller input, world space UI canvases, locomotion and teleportation, timeline animation, and multiplayer networking. You’ll learn the Unity 3D game engine via the interactive Unity Editor and C# programming. By the end of this Learning Path, you’ll be fully equipped to develop rich, interactive mixed reality experiences using Unity.This Learning Path includes content from the following Packt products:Unity Virtual Reality Projects - Second Edition by Jonathan LinowesUnity 2018 Augmented Reality Projects by Jesse GloverWhat you will learnCreate 3D scenes to learn about world space and scaleMove around your scenes using locomotion and teleportationCreate filters or overlays that work with facial recognition softwareInteract with virtual objects using eye gaze, hand controllers, and user input eventsDesign and build a VR storytelling animation with a soundtrack and timelinesCreate social VR experiences with Unity networkingWho this book is forIf you are a game developer familiar with 3D computer graphics and interested in building your own AR and VR games or applications, then this Learning Path is for you. Any prior experience in Unity and C# will be an advantage. In all, this course teaches you the tools and techniques to develop engaging mixed reality applications.