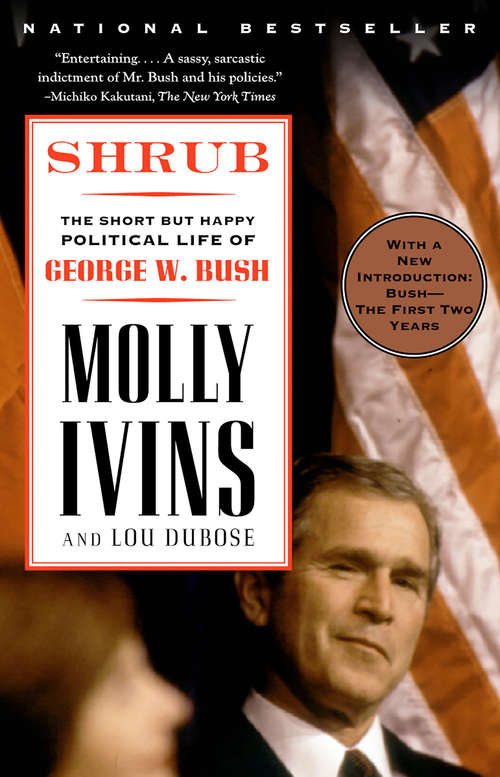 When it comes to reporting on politics, nobody does it smarter or funnier than bestselling author Molly Ivins. In Shrub, Ivins focuses her Texas-size smarts on the biggest politician in her home state: George Walker Bush, or "Shrub," as Ivins has nicknamed Bush the Younger.          A candidate of vague speeches and an ambiguous platform, Bush leads the pack of GOP 2000 presidential hopefuls; "Dubya" could very well be our next president. What voters need now is an original, smart, and accessible analysis of Bush--one that leaves the "youthful indiscretions" to the tabloids and gets to the heart of his policies and motivations. Ivins is the perfect woman for the job.          With her trademark wit and down-home wisdom, Molly Ivins shares three pieces of advice on judging a politician: "The first is to look at the record. The second is to look at the record. And third, look at the record. " In this book, Ivins takes a good, hard look at the record of the man who could be the leader of the free world. Beginning with his post-college military career, Ivins tracks Dubya's winding, sometimes unlikely path from a failed congressional bid to a two-term governorship. Bush has made plenty of friends and supporters along the way, including Texas oil barons, evangelist Billy Graham, and co-investors in the Texas Rangers baseball team. "You would have to work at it to dislike the man," she writes. But for all of Bush's likeability, Ivins points to a disconcerting lack of political passion from this ascending presidential candidate. In her words, "If you think his daddy had trouble with 'the vision thing,' wait till you meet this one. "          Witty, trenchant, and on target, Ivins gives a singularly perceptive and entertaining analysis of George W. Bush. To head to the voting booth without it would be downright un-American. From Shrub: The Short but Happy Political Life of George W. Bush "        The past is prologue in politics. If a politician is left, right, weak, strong, given to the waffle or the flip-flop, or, as sometimes happens, an able soul who performs well under pressure, all that will be in the record. "  ¸         Bush's welfare record:"Texas pols like to 'git tuff' on crime, welfare, commies, and other bad stuff. Bush proposed to git tuff on welfare recipients by ending the allowance for each additional child--which in Texas is $38 a month. "  ¸         Bush and the Christian right:"Bush has learned to dance with the Christian right. It has been interesting and amusing to watch the process. Interesting because it's sometimes hard to tell who's leading and who's following; amusing because when a scion of Old Yankee money gets together with a televangelist with too much Elvis, the result is swell entertainment. "  ¸         Bush's environmental record:Since Governor Bush's election, Texas air quality has been rated the worst in the nation, leading all fifty states in overall toxic releases, recognized carcinogens in the air, cancer risk, and ten other categories of pollutants.  ¸         Bush's military career:"Bush was promoted as the Texas Air National Guard's an