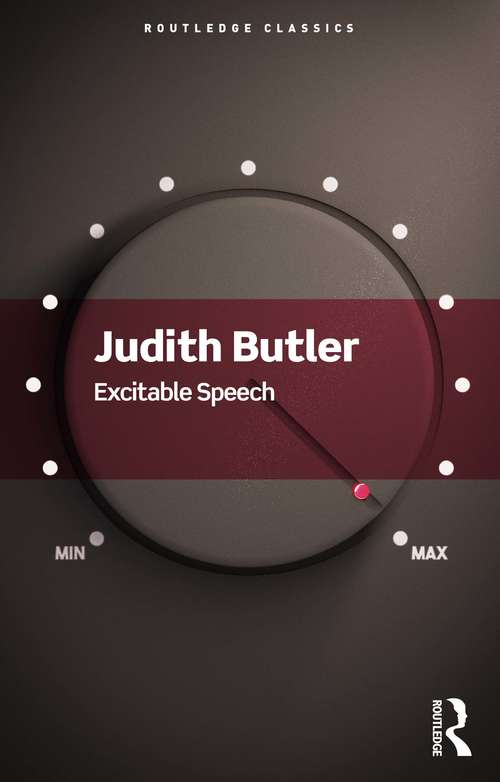 ‘When we claim to have been injured by language, what kind of claim do we make?’ - Judith Butler, Excitable Speech

Excitable Speech is widely hailed as a tour de force and one of Judith Butler’s most important books. Examining in turn debates about hate speech, pornography and gayness within the US military, Butler argues that words can wound and linguistic violence is its own kind of violence. Yet she also argues that speech is ‘excitable’ and fluid, because its effects often are beyond the control of the speaker, shaped by fantasy, context and power structures.

In a novel and courageous move, she urges caution concerning the use of legislation to restrict and censor speech, especially in cases where injurious language is taken up by aesthetic practices to diminish and oppose the injury, such as in rap and popular music. Although speech can insult and demean, it is also a form of recognition and may be used to talk back; injurious speech can reinforce power structures, but it can also repeat power in ways that separate language from its injurious power. Skillfully showing how language’s oppositional power resides in its insubordinate and dynamic nature and its capacity to appropriate and defuse words that usually wound, Butler also seeks to account for why some clearly hateful speech is taken to be iconic of free speech, while other forms are more easily submitted to censorship.

In light of current debates between advocates of freedom of speech and ‘no platform’ and cancel culture, the message of Excitable Speech remains more relevant now than ever.

This Routledge Classics edition includes a new Preface by the author, where she considers speech and language in the context contemporary forms of political polarization.