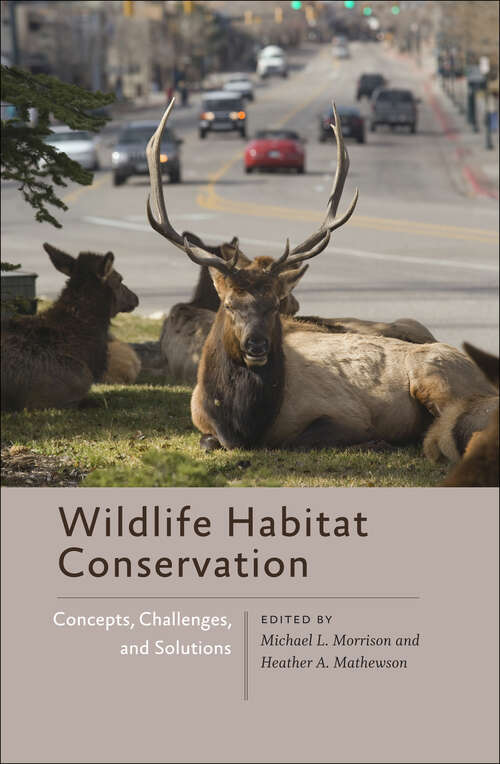 By: Heather A. Mathewson and Michael L. Morrison
लॉगइन
Sign Up

A book that emphasized the concept of wildlife habitat for a generation of students and professionals is now available to even more readers."Habitat" is probably the most common term in ecological research. Elementary school students are introduced to the term, college students study the concept in depth, hunters make their plans based on it, nature explorers chat about the different types, and land managers spend enormous time and money modifying and restoring habitats. Although a broad swath of people now have some notion of what habitat is, the scientific community has by and large failed to define it concretely, despite repeated attempts in the literature to come to meaningful conclusions regarding what habitat is and how we should study, manipulate, and ultimately conserve it.Wildlife Habitat Conservation presents an authoritative review of the habitat concept, provides a scientifically rigorous definition, and emphasizes how we must focus on those critical factors contained within what we call habitat. The result is a habitat concept that promises long-term persistence of animal populations. Key concepts and items in the book include:• Rigorous and standard conceptual definitions of wildlife and their habitat.• A discussion of the essential integration of population demographics and population persistence with the concept of habitat.• The importance of carryover and lag effects, behavioral processes, genetics, and species interactions to our understanding of habitat. • An examination of spatiotemporal heterogeneity, realized through fragmentation, disruption to eco-evolutionary processes, and alterations to plant and animal assemblages.• An explanation of how anthropogenic effects alter population size and distribution (isolation), genetic processes, and species diversity (including exotic plants and animals).• Advocacy of proactive management and conservation through predictive modeling, restoration, and monitoring.Each chapter is accessibly written in a style that will be welcomed by private landowners and public resource managers at local, state, and federal levels. Also ideal for undergraduate and graduate natural resource and conservation courses, the book is organized perfectly for a one-semester class.Published in association with The Wildlife Society.