People of the Volcano 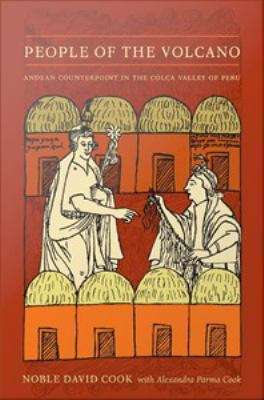 While it now attracts many tourists, the Colca Valley of Peru's southern Andes was largely isolated from the outside world until the 1970s, when a passable road was built linking the valley--and its colonial churches, terraced hillsides, and deep canyon--to the city of Arequipa and its airport, eight hours away. Noble David Cook and his co-researcher Alexandra Parma Cook have been studying the Colca Valley since 1974, and this detailed ethnohistory reflects their decades-long engagement with the valley, its history, and its people. Drawing on unusually rich surviving documentary evidence, they explore the cultural transformations experienced by the first three generations of Indians and Europeans in the region following the Spanish conquest of the Incas. Social structures, the domestic export and economies, and spiritual spheres within native Andean communities are key elements of analysis. Also highlighted is the persistence of duality in the Andean world: perceived dichotomies such as those between the coast and the highlands, Europeans and Indo-Peruvians. Even before the conquest, the Cabana and Collagua communities sharing the Colca Valley were divided according to kinship and location. The Incas, and then the Spanish, capitalized on these divisions, incorporating them into their state structure in order to administer the area more effectively, but Colca Valley peoples resisted total assimilation into either. Colca Valley communities have shown a remarkable tenacity in retaining their social, economic, and cultural practices while accommodating various assimilationist efforts over the centuries. Today's population maintains similarities with their ancestors of more than five hundred years ago--in language, agricultural practices, daily rituals, familial relationships, and practices of reciprocity. They also retain links to ecological phenomena, including the volcanoes from which they believe they emerged and continue to venerate.