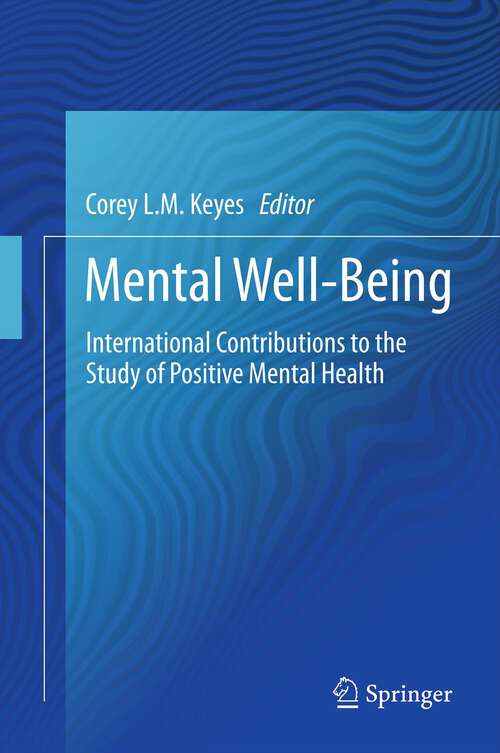 This book provides a new generation of research in which scholars are investigating mental health and human development as not merely the absence of illness or dysfunction, but also the presence of subjective well-being. Subjective well-being is a fundamental facet of the quality of life. The quality of an individual's life can be assessed externally and objectively or internally and subjectively. From an objective standpoint, other people measure and judge another's life according to criteria such as wealth or income, educational attainment, occupational prestige, and health status or longevity. Nations, communities, or individuals who are wealthier, have more education, and live longer are considered to have higher quality of life or personal well-being. The subjective standpoint emerged during the 1950s as an important alternative to the objective approach to measuring individual's well-being. Subjectively, individuals evaluate their own lives as evaluations made, in theory, after reviewing, summing, and weighing the substance of their lives in social context.

In turn, there is growing recognition of the personal and social utility of subjective well-being, both higher levels of hedonic and eudaimonic wellbeing. Increased subjective well-being has been linked with higher personal and social 'goods': higher business profits, more worker productivity, greater employee retention; increased protection against mortality; increased protection against the onset and increase of physical disability with aging; improved cognitive and immune system functioning; and increased levels of social capital such as civic responsibility, generativity, community involvement and volunteering. This edited volume brings together for the first time the growing scientific literature on positive mental health that is now being conducted in many countries other than the USA and provides students and scholars with an invaluable source for teaching and for generating new ideas for furthering this important line of research.