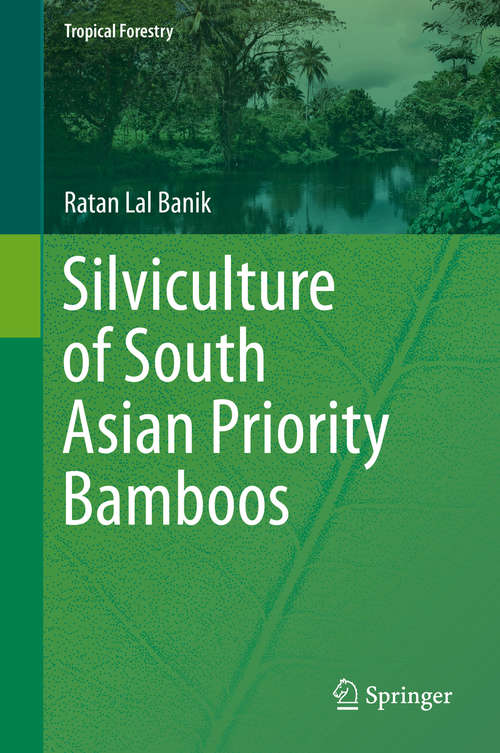 This monographaims at bringing out a comprehensive collection of information on bamboovarieties in South Asia. The main focus of this book is to address theecological and economic significance of bamboos. Bamboo is a versatile group of plants, capable of providing ecological,economic and livelihood security to the people. In the tropics, especially therural areas in different countries of  South Asia, most of the houses aremade of bamboos. In the hilly areas of Bangladesh, Bhutan, Nepal and India, thetribal people take bamboo shoots as one of their major food items sinceprehistoric days.  With  palatableshoots and grass like leaves bamboo plants have also been liked by  many herbivore animals, such as, elephants,the wild cattle, Indian Bison, and  some speciesof deer. The red-panda in the Himalayas, and primates,pigs, rats and mice, porcupines, and squirrels are also incidental feeders onsoutheast Asian bamboos. There has been a growing awareness in recent years about the values ofbamboo being an important means of economic growth and for improving thesocio-economic conditions of the rural poor.   Bamboo as an industrialmaterial can substitute wood and that to at low cost. Due to increasing demandand squeezing of bamboo area the plants have been overexploited and the qualityand quantity of resource alarmingly getting depleted. Besides many new bamboobased industries have come up which also urgently require uninterrupted supplyof species wise bamboo resource. The south Asia region has bestowed with  more than 300 bamboospecies with enormous diversities at species, ecological and geneticallevel.   A number of  bamboo species are found common among countriesof the region selected for various utilization potentials  having wide range of ability to adjustenvironmental conditions of these countries and thus prioritized forcultivation.   Both government and private planters in the  region have started allocating funds, land andother logistics to raise large scale plantation of desired   bamboospecies. This book has been drafted to find out answers of the most pertinentqueries based on the field observations on each of the bamboo species andknowledge learnt from the indigenous people living with bamboos in differentparts of south-east and south Asian countries.   This monograph would beinteresting and useful to bamboo professionals, foresters, horticulturists,field level extension workers, nurserymen, planters, industrial entrepreneurs,ecologists, and valuable source of reference to the relevant researchers andstudents in the region.