A World Too Near 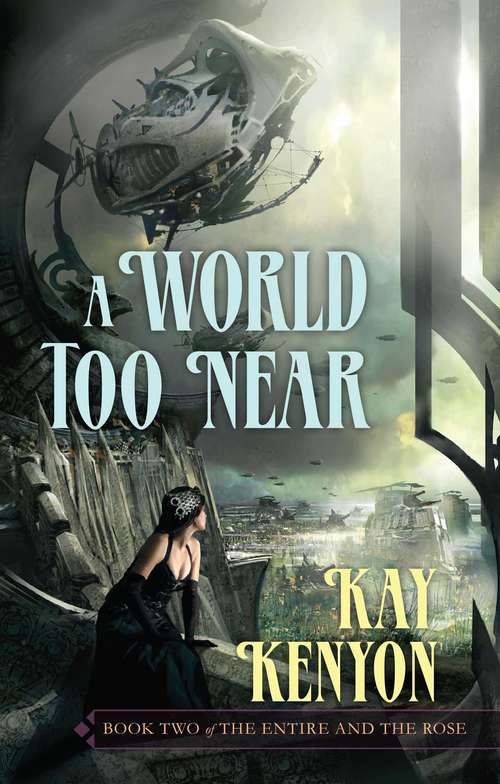 In Bright of the Sky, Kay Kenyon introduced a milieu unique in science fiction and fantasy: The Entire, a five-armed radial universe that exists in a dimension without stars and planets and is parallel to our own universe. Stretched over The Entire is a lid of plasma, called the bright, which ebbs and flows, bringing day and twilight. Under the vast canopy of the bright live many galactic species, copied from our own universe. Former star pilot Titus Quinn loves The Entire, but now he must risk annihilating it by destroying the fortress of Ahnenhoon. To sustain a faltering Entire, Ahnenhoon's great engine will soon reach through the brane separating the universes and consume our own universe in a concentrated ball of fire. Quinn sets off on a journey across The Entire armed with the nan, a small ankle bracelet containing nanoscale military technology that can reduce Ahnenhoon and its deadly engine to chaos. He must pursue his mission even though his wife is held prisoner in Ahnenhoon and his own daughter has sent the assassin MoTi to hunt him down. As he traverses the galactic distances of The Entire, he learns more of the secrets of its geography, its fragile storm walls, its eons-long history, and the factions that contend for dominance. One of these factions is led by his daughter, who though young and a slave, has at her command a transforming and revolutionary power. As Quinn wrestles with looming disaster and approaches the fabled concentric rings of Ahnenhoon's defenses, he learns that in the Entire, nothing is what it appears. Its denizens are all harboring secrets, and the greatest of these is the nature of the Entire itself.