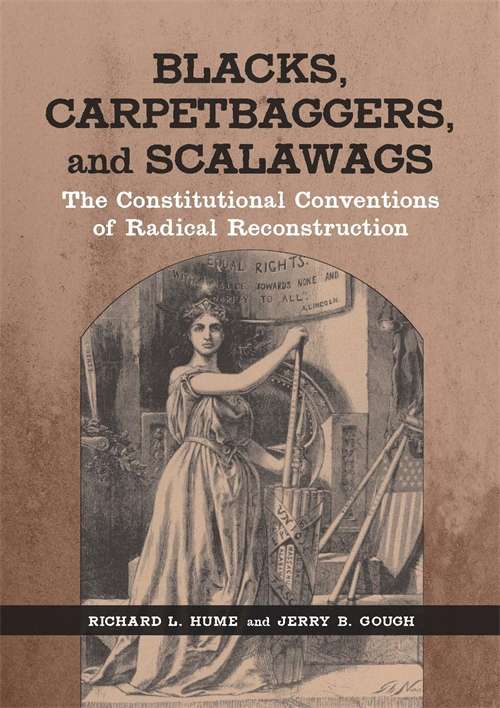 After the Civil War, Congress required ten former Confederate states to rewrite their constitutions before they could be readmitted to the Union. An electorate composed of newly enfranchised former slaves, native southern whites (minus significant numbers of disenfranchised former Confederate officials), and a small contingent of "carpetbaggers," or outside whites, sent delegates to ten constitutional conventions. Derogatorily labeled "black and tan" by their detractors, these assemblies wrote constitutions and submitted them to Congress and to the voters in their respective states for approval. Blacks, Carpetbaggers, and Scalawags offers a quantitative study of these decisive but little-understood assemblies -- the first elected bodies in the United States to include a significant number of blacks. Richard L. Hume and Jerry B. Gough scoured manuscript census returns to determine the age, occupation, property holdings, literacy, and slaveholdings of 839 of the conventions' 1,018 delegates. Carefully analyzing convention voting records on certain issues -- including race, suffrage, and government structure -- they correlate delegates' voting patterns with their racial and socioeconomic status. The authors then assign a "Republican support score" to each delegate who voted often enough to count, establishing the degree to which each delegate adhered to the Republican leaders' program at his convention. Using these scores, they divide the delegates into three groups -- radicals, swing voters, and conservatives -- and incorporate their quantitative findings into the narrative histories of each convention, providing, for the first time, a detailed analysis of these long-overlooked assemblies. Hume and Gough's comprehensive study offers an objective look at the accomplishments and shortcomings of the conventions and humanizes the delegates who have until now been understood largely as stereotypes. Blacks, Carpetbaggers, and Scalawags provides an essential reference guide for anyone seeking a better understanding of the Reconstruction era.