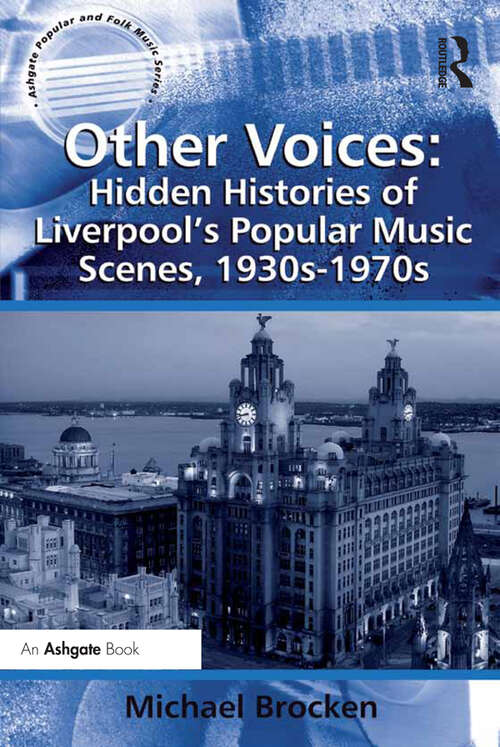 At times it appears that a whole industry exists to perpetuate the myth of origin of the Beatles. There certainly exists a popular music (or perhaps 'rock') origin myth concerning this group and the city of Liverpool and this draws in devotees, as if on a pilgrimage, to Liverpool itself. Once 'within' the city, local businesses exist primarily to escort these pilgrims around several almost iconic spaces and places associated with the group. At times it all almost seems 'spiritual'. One might argue however that, like any function myth, the music history of the Liverpool in which the Beatles grew and then departed is not fully represented. Beatles historians and businessmen-alike have seized upon myriad musical experiences and reworked them into a discourse that homogenizes not only the diverse collective articulations that initially put them into place, but also the receptive practices of those travellers willing to listen to a somewhat linear, exclusive narrative. Other Voices therefore exists as a history of the disparate and now partially hidden musical strands that contributed to Liverpool's musical countenance. It is also a critique of Beatles-related institutionalized popular music mythology. Via a critical historical investigation of several thus far partially hidden popular music activities in pre- and post-Second World War Liverpool, Michael Brocken reveals different yet intrinsic musical and socio-cultural processes from within the city of Liverpool. By addressing such 'scenes' as those involving dance bands, traditional jazz, folk music, country and western, and rhythm and blues, together with a consideration of partially hidden key places and individuals, and Liverpool's first 'real' record label, an assemblage of 'other voices' bears witness to an 'other', seldom discussed, Liverpool. By doing so, Brocken - born and raised in Liverpool - asks questions about not only the historicity of the Beatles-Liverpool narrative, but also about the absence o