Caves and Karst of the Upper Midwest, USA 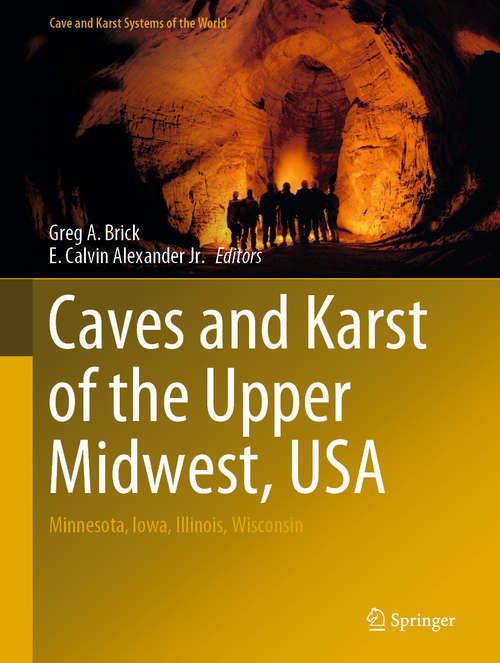 This book discusses the karst and pseudokarst of the Upper Midwest, USA, consisting of the states of Minnesota, Wisconsin, Iowa, and Illinois—the first regional synthesis in 40 years. Starting with an overview of the regional geology of what is largely glaciated fluviokarst and paleokarst developed on Paleozoic carbonates, but including other lithologies such as the St. Peter Sandstone and the Ft. Dodge Gypsum, the caves, springs, sinkholes, and karst hydrogeology of each state are described. Special attention is devoted to the region’s longest caves: Coldwater Cave, Mystery Cave, and the Minnesota Cave Preserve caves. Application of tools such as data loggers and LiDAR, with new conceptual models such as hypogenic speleogenesis, has been transformative here. Special topics include lead and zinc mining in the Driftless Area, vertebrate and invertebrate cave fauna near the Laurentide ice limit, the impact and policies of nutrient and herbicide intensive modern agriculture on karst, and paleoclimate studies. The discovery, exploration, institutional history of caving organizations, and show caves of the Upper Midwest, from the year 1700 onwards, are brought up to date. The top 10 historical paradigms of cave and karst science in the Midwest are reviewed. Perspectives on paleontology, archeology, and Native American rock art are included.