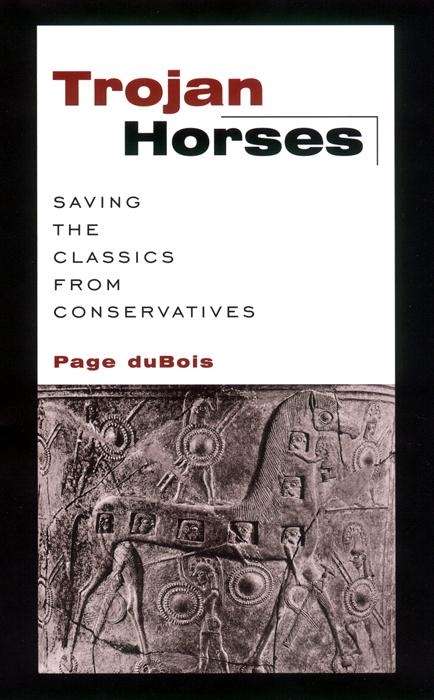 We've become accustomed to the wisdom of the ancient Greeks being trotted out by conservatives in the name of timeless virtues. At the same time, critics have charged that multiculturalists and their ilk have hopelessly corrupted the study of antiquity itself, and that the teaching of Classics is dead. Trojan Horses is Page duBois's answer to those who have appropriated material from antiquity in the service of a conservative political agendaamong them, Camille Paglia, Allan Bloom, and William Bennett. She challenges cultural conservatives' appeal to the authority of the classics by arguing that their presentation of ancient Greece is simplistic, ahistorical, and irreparably distorted by their politics. As well as constructing a devastating critique of these pundits, Trojan Horses seeks to present a more complex and more accurate view of ancient Greek politics, sex, and religion, with a Classics primer. She eloquently recounts the tales of Daedalus and Artemis, for example, conveying their complexity and passion, while also unearthing actions and beliefs that do not square so easily with today's "family values." As duBois writes, "Like Bennett, I think we should study the past, but not to find nuggets of eternal wisdom. Rather we can comprehend in our history a fuller range of human possibilities, of beginnings, of error, and of difference." In these fleet chapters, duBois offers readers a view of the ancient Greeks that is more nuanced, more subtle, more layered and in every way more historical than the portrait other writers, of whatever stripe, want to popularize and see displayed in our classrooms. Sharp, timely, and engaging, Trojan Horses portrays the richness of ancient Greek culture while riding in to rescue the Greeks from the new barbarians.