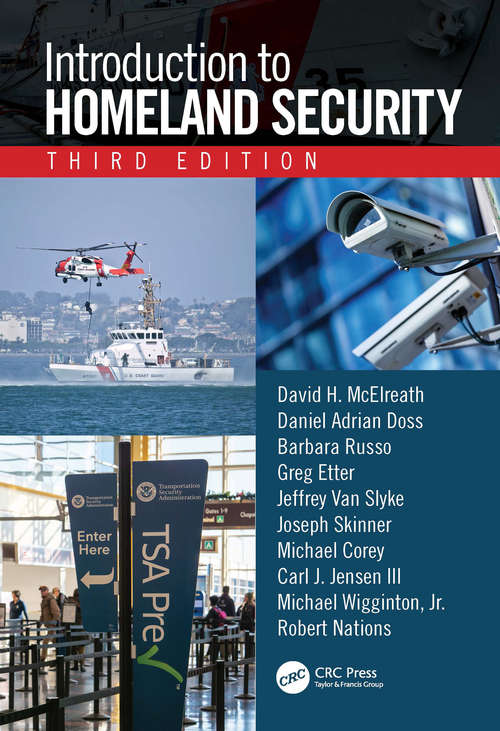 Introduction to Homeland Security, Third Edition provides the latest developments in the policy and operations of domestic security efforts of the agencies under the U.S. Department of Homeland Security. This includes the FBI, Secret Service, FEMA, the Coast Guard, TSA and numerous other federal agencies responsible for critical intelligence, emergency response, and the safety and security of U.S. citizens at home and abroad. Changes in DHS and domestic security are presented from pre-September 11, 2001 days, to include the formation of DHS under President George W. Bush, all the way through to the current administration. Through this, the many transformative events are looked at through the lens of DHS’s original establishment, and the frequent changes to the various agencies, organization, reporting structure, funding, and policies that have occurred since.

This new edition is completely updated and includes coverage of topics relevant to homeland security operations not covered in any other text currently available. This includes highlighting the geopolitical context and the nature of global terrorism—and their implications—specifically as they relate to threats to the United States. Partnerships and collaboration with global allies are highlighted in the context of their relevance to international trade, domestic policies, training, and security. The book ends with a look at emerging threats and potential new, creative solutions—and initiatives in-process within the government—to respond to and address such threats.

Explores the history and formation of the Department of Homeland Security, recent developments, as well as the role and core missions of core agencies within DHS

Looks critically at the role of geopolitical dynamics, key international allies, and their influence on domestic policy and decision-making

Covers the latest developments in programs, legislation, and policy relative to all transportation and border security issues

Addresses natural and man-made disasters and the emergency management cycle in preparing for, mitigating against, responding to, and recovering from such events

Introduction to Homeland Security, Third Edition remains the premier textbook for criminal justice, homeland security, national security, and intelligence programs in universities and an ideal reference for professionals as well as policy and research institutes.