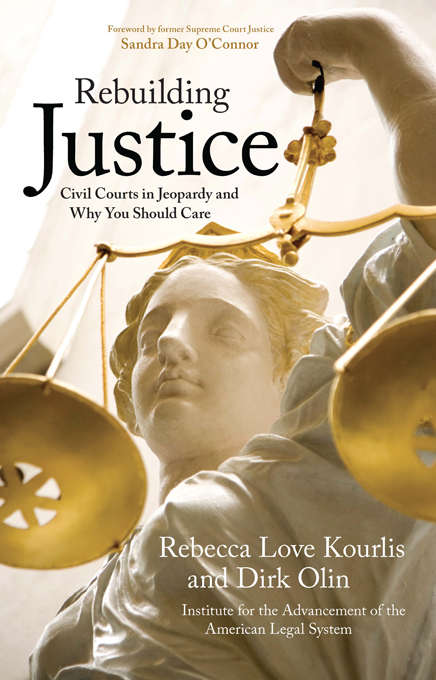 "We are blessed with many excellent judges and court staff . . . but they and all the rest of us have an obligation to work hard to improve the system so that it is both impartial and accountable."--From the foreword by Sandra Day O'Connor Over the past several decades, the civil justice process has become alarmingly expensive, politicized, and lengthy. Though the court system lies at the heart of American democracy, it often does not meet the legitimate needs of the people, resulting in a rift between citizens and their own legal system. With a system that hasn't seen major reform since 1938, it's inevitable that there are shortcomings and misunderstandings. The situation is precarious, but not hopeless. In Rebuilding Justice, Rebecca Love Kourlis and Dirk Olin illuminate why the courts are critical and how they are being eroded, defaced, and undermined. While covering complex issues such as civil justice reform, judicial selection and performance evaluation, and domestic relations, Kourlis and Olin propose practical solutions to improve the efficiency, accessibility, and integrity of America's civil courts. An important portrait of the American judicial system, Rebuilding Justice is a call to action for all Americans to take the steps necessary to fix, support, and protect this crucial cornerstone of our democracy. Rebecca Love Kourlis is the founder and executive director of the Institute for the Advancement of the American Legal System, a former justice of the Colorado Supreme Court, a former District Court Judge, and a former trial judge. She holds undergraduate and law degrees from Stanford University. Dirk Olin is a legal affairs journalist who currently serves as editor and publisher of Corporate Responsibility Magazine. He holds a bachelor's degree from Dartmouth College and a master's degree from Northwestern Journalism School.